Reflecting on the Origins of Parallel and Crossover Lives

In the fall of 1993, for a brief moment, the small town of Hempstead, Texas (population 3,500), made the national news and talk show circuit: four of the town's fifteen cheerleaders were pregnant. One of the girls had an abortion and was permitted to continue cheerleading; the other three had been removed from the squad. The brouhaha eventually involved the United States Department of Education, the American Civil Liberties Union, and other state and national organizations. There was a powerful undercurrent of racial tension in the story, as well: the girls who had decided to continue their pregnancies to term were all black, the girl who got an abortion was white.

I first came to Hempstead two years later, in the fall of 1995. Because the racially-charged cheerleader incident had pitted Hempstead's black community against the Hempstead Independent School District (HISD), I set out to understand more about how the community's African American residents viewed the school district as well as their views of their children's educational needs.

A word about my background is in order here. I teach in the Department of Educational Psychology at The University of Texas at Austin. I am a psychologist and a psychoanalyst, and I have spent the last twenty years or so working in communities like Hempstead that have experienced different kinds of strife or violence. My methodology is a bit of a hybrid: I rely heavily on ethnographic approaches, going into communities much like anthropologists do to try to understand the different currents at work within them, but I also work like a psychoanalyst, given that my interviews tend to be very psychological and personal. I take time to get to know people, and in all of the communities where I have worked there are people whom I have interviewed repeatedly over a long period of time, often years.

I learned two things from my initial interviews in Hempstead. There appeared to be an enormous gulf between Hempstead's African American community and the local school district. Second, there was a powerful and continuing attachment to the Sam Schwarz School, Hempstead's Jim Crow era black school. Sam Schwarz was the school that many black parents and grandparents had attended prior to 1967.

Over the course of eighteen months, I spent two to three days in Hempstead every month to six weeks, unless events in the town dictated a different schedule. My aim was to get to know the community. I attended the Waller County Fair, the Hempstead Watermelon Festival, and the Juneteenth Celebrations marking the day when Texas's slaves learned of the Emancipation Proclamation. I attended services in black churches, and I subscribed to The Waller County News Citizen, the local newspaper. I also made regular visits to the newspaper's archive.

One of my early interviews in Hempstead was with a woman named Mary Ragston. Ms. Ragston had attended Sam Schwarz School during Jim Crow. After graduating high school, she had earned a teaching degree at Prairie View A&M University, a historically African American institution with an exceptional teaching program, after which she had returned to teach at Sam Schwarz School. When school desegregation was mandated by the Federal government, Ms. Ragston was one of only three teachers from the Sam Schwarz staff to be invited to "crossover"—that is, to teach at Hempstead's formerly all white high school, where she was still teaching when I met her.

Another early interview was with a man named Leroy Singleton. Mr. Singleton, also a Sam Schwarz alumnus, had recently completed his term as Hempstead's first African American mayor. During my initial visit, Mr. Singleton pointed out a sign on the side of a building where it was evident that a door had been bricked in—the more recent brickwork contrasted with the faded bricks of the original structure.  Above the door, still visible in blocked, white letters, was the word "COLORED." It marked the entrance to which blacks had once been relegated when entering what was then an eating establishment. More than thirty years after the passage of the Civil Rights Act, this vestige of Jim Crow remained, in plain sight, on Hempstead's most heavily travelled street.

So began the oral history project that later became Parallel and Crossover Lives. My interviews focused on the black community's experience of school desegregation, an experience that I understood as much more complex than the typical narratives of the civil rights era suggest. Every trace of the Sam Schwarz School had been erased. Without consultation with the black community the building was razed. As described in Crossover: A Story of Desegregation, [the documentary film,] most of the contents of the school, including a trove of trophies that personified generations of Jim Crow era successes in scholastic and athletic competition, simply vanished. Some in the community claimed that the trophies had been summarily loaded up and taken to the city dump. Others claimed that school officials had stored the memorabilia only to be destroyed by vandals. The only consensus was that the trophies had indeed disappeared. For many blacks, the fate of the trophies was emblematic of the experience that whites had no regard or respect for anything that the black community valued.

In all, there were four interrelated projects/interventions funded by Humanities Texas. The first was the fifty-five-minute documentary film, Crossover: A Story of Desegregation. The film has been screened in high schools, universities, community events, and professional conferences. Second, there was the oral history project that allowed my students and me to collect accounts from the broader community (beyond those who were in the documentary) of their experiences of school desegregation. The third was a significant community event, the Sam Schwarz Reunion and Retrospective, consisting of two sections: first, a morning program in which the HISD administrators, teachers, and white and black parents of current students gathered to learn about the Sam Schwarz School and the history of school desegregation in their community, and second, the first-ever reunion of Sam Schwarz School alumni since the closing of the school. Finally, the work in Hempstead became the platform for a collaboration between Humanities Texas, the National Endowment for the Humanities, the Texas Association of Developing Colleges, and the Texas African American Heritage Association, to gather oral histories of school desegregation experiences in other Texas communities.

Perhaps it is my background as a psychologist, but I have always viewed these projects as more than simple oral histories. Or perhaps a better way of saying this is that I view the process of gathering these stories and accounts of important, defining personal and collective experiences as a process that has a healing, therapeutic power. When individuals and communities are exposed to overwhelming experiences, such as the violence and devaluations suffered by African Americans during Jim Crow, the traumatic potential of those experiences is further amplified when they go unacknowledged. In Hempstead, there were virtually no referents to be found that might point to the important place that the Sam Schwarz School had once played in the community. There wasn't even an historical marker to indicate that at the site of the current HISD administrative offices there had once stood a structure of immense importance to the African American community.  In my view, the telling of Hempstead's desegregation stories through the film, through the broader oral histories, and through the Sam Schwarz Reunion and Retrospective, served an important healing function, even if they could obviously not hope to entirely undo the painful experiences suffered by the African American community in Hempstead. In a similar vein, the subsequent Parallel and Crossover Lives project that emerged from the Hempstead work and took its spirit to other places, hopefully has contributed something meaningful to those who have undertaken such oral histories in their own communities. I know that there are many more such school desegregation oral histories to be found in our communities. I also know that while these other oral histories will share something in common with Hempstead's story, each will have its own, unique set of experiences that need to be documented. Undertaking these efforts is even more crucial today, given that our window for talking to those who lived during this time narrows with each day that passes.

Watch Crossover: A Story of Desegregation, a fifty-five-minute documentary film directed by Ricardo C. Ainslie that addresses issues of cultural conflict and transformation by examining the impact of school desegregation on the community of Hempstead, Texas. 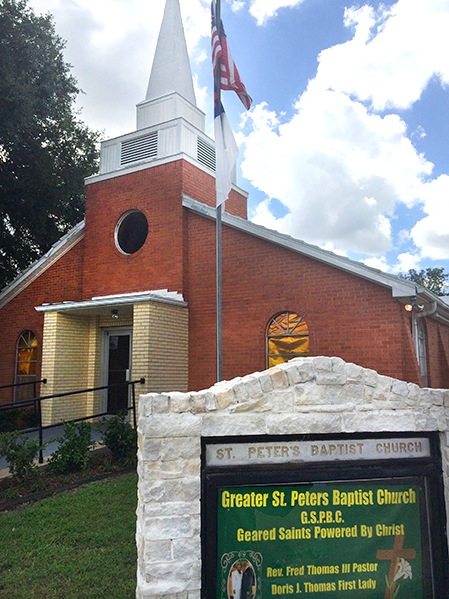 Greater St. Peter's Missionary Baptist Church in Hempstead. The church's minister, the Reverend Fred Thomas III, is one of the community members featured in Crossover Lives, and the church hosted many of the project interviews. Photo by Ricardo C. Ainslie, 2014. 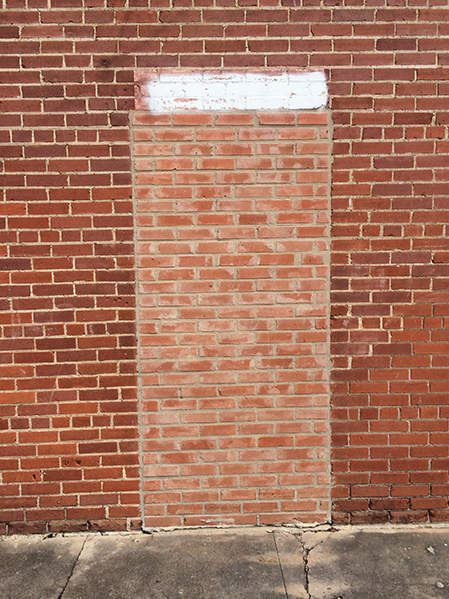 The wall that Leroy Singleton brought to Ricardo Ainsle's attention during an early visit to Hempstead. Subsequent to the Sam Schwarz Reunion and Retrospective, the word "COLORED" was painted over. Photo by Ricardo C. Ainslie, 2014. 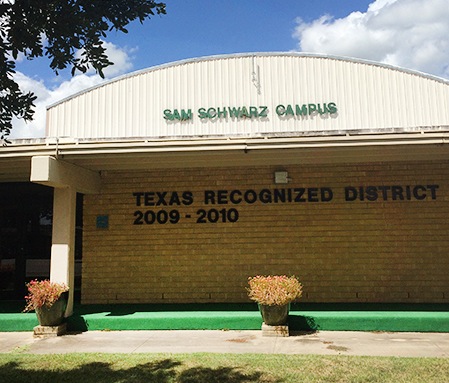 Site of the former Sam Schwarz School. The original school building was torn down, and this structure, built in its place, houses the Hempstead Independent School District administrative offices. Photo by Ricardo C. Ainslie, 2014. 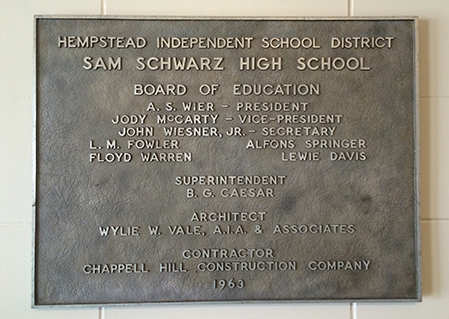 Sign at the site of the former Sam Schwarz School. Photo by Ricardo C. Ainslie, 2014.