Parallel and Crossover Lives:
Texas Before and After Desegregation

In 2000, Humanities Texas (then the Texas Council for the Humanities) introduced Parallel and Crossover Lives: Texas Before and After Desegregation, an initiative developed in partnership with the Texas Association of Developing Colleges (Dallas) and the Texas African American Heritage Association (Austin). This pilot oral history project, conducted at Jarvis Christian College in Hawkins and Huston-Tillotson University in Austin, was created to document personal experiences with school desegregation in Texas communities.

With funding from the National Endowment for the Humanities Extending the Reach initiative, the two private, historically black colleges hosted public screenings of Ricardo Ainslie's grant-funded documentary Crossover: A Story of Desegregation and held oral history workshops before launching projects to record oral histories from members of the community. Each project site produced a video from the interviews they recorded.

An introductory essay by Dr. Glenn Linden, associate professor of history in Dedman College at Southern Methodist University and author of Desegregating Schools in Dallas: Four Decades in the Federal Courts.

Meet the People of Parallel and Crossover Lives

Brief biographies of the people interviewed about their experiences with desegregation in their communities and schools along with links to their interview transcripts.

Links to the oral history transcripts of those interviewed about their experiences with desegregation in their communities and schools.

This teacher's guide offers discussion and activity ideas related to the civil rights movement, desegregation on the national level, and the Parallel and Crossover Lives interviews available here. Download a PDF version of the Teacher's Guide. 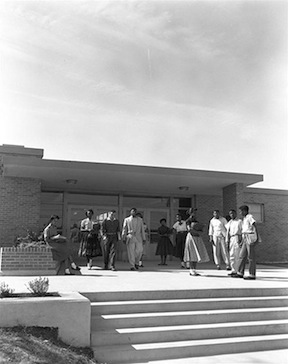 As part of our ongoing oral history feature, our December 2014 e-newsletter highlights excerpts from two of the thirty interviews conducted for Parallel and Crossover Lives. In the first interview, the Honorable Wilhelmina Delco discusses the desegregation of Austin Independent School District during her time serving on the Austin school board. In the second interview, the Reverend Dr. S. L. Curry reflects on his experience as one of the first African American students to attend the newly integrated Big Sandy High School in Big Sandy, Texas.