On August 25, 2018, Andrew J. Torget, professor of history at the University of North Texas and popular faculty member at Humanities Texas teacher professional development workshops, earned an unusual addition to his resume by setting the Guinness World Record for the world's longest history lesson. Though Guinness representatives have not yet made the ruling official, Torget's lecture of twenty-six hours and thirty-three minutes is expected to assume the title from the previous record holder.

The lesson, which covered Texas history from the prehistoric era through the twentieth century, began at 9:00 a.m. on August 24. Armed with a 1,600-slide PowerPoint presentation and five hundred pages of notes, Torget lectured to an audience of resilient students, at least ten of whom had to remain awake throughout the lesson for the record attempt to be eligible.

The event also served as a fundraiser for the Portal to Texas History, the online repository of historical materials from or about Texas that is created and maintained by UNT Libraries. Torget said that his primary goal was "to raise awareness and support for all the tremendous work that the UNT Libraries do in preserving historical records from the Texan past and making them freely available online." The digital archive received over $12,000 in donations thanks to Torget's lengthy lesson. 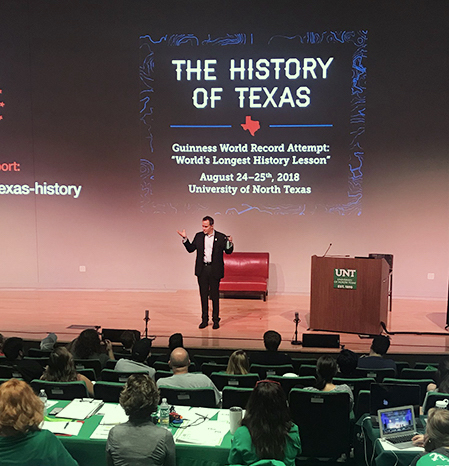 Andrew Torget begins his record-breaking lecture on Texas history. Photo by Caitlyn Jones. Read her firsthand account of the event in the Denton Record-Chronicle.