For five decades, Humanities Texas has advanced education in Texas through programs that improve the quality of classroom teaching, support libraries and museums, and create opportunities for lifelong learning.

Founded in 1973 as the state affiliate of the National Endowment for the Humanities (NEH), Humanities Texas is one of fifty-six state and jurisdictional humanities councils in the U.S. We are a private nonprofit organization supported by federal and state appropriations, as well as by foundations, corporations, and individuals.

In 1965, the 89th Congress of the United States passed the National Foundation on the Arts and Humanities Act (Public Law 209). This act established a National Endowment for the Arts (NEA) and a National Endowment for the Humanities (NEH). (See here for more on the establishment of the NEH.) Congress encouraged both endowments to decentralize at least a portion of their funding. By 1972, the NEH decided that nonprofit citizen committees afforded the best opportunity for promoting the humanities at the grassroots level in each state.

In May 1972, the NEH invited four Texans to a two-day conference in Washington to be briefed on NEH's state program. These individuals were Thomas B. Brewer, vice chancellor of Texas Christian University; Levi A. Olan, Dallas rabbi and former member of The University of Texas Board of Regents; Emmet Field, vice president of academic affairs at the University of Houston; and David M. Vigness, chair of the department of history at Texas Tech University. The group then held meetings in Dallas to discuss establishing such an organization in Texas. Through the leadership of Dr. Brewer, the Texas Committee for the Humanities applied for and received a $20,000 planning grant from the NEH, and operations began on January 1, 1973.

The board next conducted a series of regional conferences to determine how the council could best approach its work in Texas, and to establish local connections and networks throughout the state. Since the NEH required all state humanities organizations to focus on the relationship between the humanities and public policy issues, the nascent organization was renamed the Texas Committee for the Humanities and Public Policy. On June 15, 1973, the Committee requested funds from NEH to support administration, program development, and grants to local projects. A $170,000, eighteen-month grant was approved, effective October 1, 1973. The Committee's board named Sandra L. Myres, a member of the history faculty at The University of Texas at Arlington, as its director. The Committee awarded its first grant in January 1974 to KUT 90.5 FM, Austin, for a series of weekly two-hour radio programs focusing on the Texas Constitutional Revision Convention. Articles of Association were signed on March 18, 1976, and remained in effect until September 5, 1985, when the Texas Committee for the Humanities was incorporated under the laws of Texas. The Internal Revenue Service granted the organization tax-exempt status on August 25, 1976.

In its 1976 legislation reauthorizing the NEH, Congress encouraged state humanities councils to undertake traditional humanities projects as well as those relating to public policy. Since that time, the Texas council has developed and funded numerous projects in traditional humanities fields including U.S. and Texas history, literature, and culture. In recognition of this shift, the organization was renamed the Texas Committee for the Humanities in 1978. In 1996, the organization was renamed the Texas Council for the Humanities (TCH), to reflect the increasing use of the word "council" rather than "committee" by Congress and other state programs when referring to the state affiliates of the NEH. In consideration of its 30th anniversary, the council desired a name more reflective of its inclusive, accessible approach to supporting public humanities programs around the state, so on January 1, 2004, the council changed its name once again, this time to Humanities Texas.

State humanities councils experienced modest increases in annual funding from the federal government from their beginning through the early 1980s. In 1986, however, the organization’s revenues were cut almost in half when federal funding dropped significantly and private sector support—weakened by the collapse of the Texas economy—diminished at the same time. Some major initiatives had to be curtailed, postponed, or eliminated. Funds were gradually restored by the early 1990s and held stable through 1995. As a result of the 1994 national elections, many federal programs, including the NEH, came under close scrutiny by the new Congress. By 1996, the annual budget for the NEH had dropped from $178 million to $110 million. State humanities councils, however, experienced more modest cuts, with TCH losing approximately 6% of its federal funding.

As a private nonprofit corporation working in cooperation with the NEH, Humanities Texas may solicit funding from the private sector. In addition to donations from our Friends group, the council has received support for particular projects from foundations and corporations. For example, The Shell Oil Companies Foundation and the Hoblitzelle Foundation provided major funding for "The Texas Experience," a project marking the Texas sesquicentennial in 1986. Funding from Brown Foundation, Inc. helped launch the council's magazine, which was published from 1977 to 2001. The T. L. L. Temple Foundation and Holt, Rinehart, and Winston, Inc., have supported our Outstanding Teaching Awards program, and the Trull Foundation has provided funds for workshops for teachers.

Cognizant that the quality of teachers is a critical factor in student achievement, Lieutenant Governor David Dewhurst initiated the expansion of the Humanities Texas Teacher Professional Development Program with state funding in 2009. This represented the council's first-ever state legislative appropriation, which the council continues to receive.

The Texas Humanities Resource Center (THRC) was established in 1978 as a unit of The University of Texas at Arlington Library. It relocated to Austin and operated as an independent nonprofit corporation from 1986 to 1992, when it merged with the Texas humanities council. Functioning as a division of the council, the THRC organized and circulated exhibitions, audiovisual programs, and print materials for use by cultural and educational communities in Texas and beyond.

In 1996, the THRC launched a major initiative to use electronic resources to improve humanities teaching in Texas schools. Humanities Interactive, an online exhibitions and educational space, received initial financial support from the Meadows Foundation, the Houston Endowment, and the NEH. THRC also co-sponsored summer workshops for K-12 teachers with colleges and universities throughout Texas from 1997 to 2003.

In 2003, the materials developed by the THRC were fully integrated within Humanities Texas’s general operations as our Exhibitions program. Humanities Texas continues to create and circulate traveling exhibitions and other humanities resources. Our exhibitions meet the needs of venues across Texas, from traditional art and history museums to schools, libraries, and community centers. These exhibitions have been displayed more than 3,000 times at venues throughout the state and nation.

From 1977 to 2001, the council published a semiannual magazine called The Texas Humanist (1977-1986), later retitled Texas Journal of Ideas, History and Culture. Each issue focused on a theme, often drawing material from council projects. Single issues examined the environment, health care, Latino literature, the pursuit of community, American pluralism, and religion in American life. The magazine highlighted important developments in the humanities, reviewed new books, films, and exhibitions, and reported on specific projects. The Journal enjoyed a circulation of more than 10,000.

We have also launched a number of special grant initiatives with the assistance of the NEH to support Texas cultural and educational organizations in times of critical need. During the COVID pandemic, we awarded 461 emergency grants totaling more than $3.4M to Texas cultural and educational institutions to sustain their operations and adjust programming during a profoundly challenging time. We also awarded fast-track emergency grants following Winter Storm Uri (2021) and Hurricanes Harvey (2017), Dolly (2008), Gustav (2008), Ike (2008), and Rita (2006).

We are currently partnering with Uvalde's El Progreso Memorial Library on a project responding to the tragic shooting at Robb Elementary School in 2022.

The first office of the Texas Committee for the Humanities was on the campus of The University of Texas at Arlington, which provided office space and some support services. The organization moved to Austin in June 1980 to be closer to other statewide organizations and to state government. In the late 1980s, Humanities Texas moved to 3809A South Second Street, a small condominium office project in South Austin. A 1990 grant from the Meadows Foundation in the amount of $50,000 provided funds for a down payment, and the council retired the mortgage in 1997.

In 2005, Humanities Texas began searching for centrally located offices that would provide both visibility within the community and a venue for programs. Size, location, and price were important considerations, but the council also wanted to find a historic building that would reflect Humanities Texas’s emphasis on history, culture, and education. In December 2006, the council purchased and moved to the Byrne-Reed House, a century-old mansion that had been wrapped in a 1970s stucco façade for nearly forty years.

Humanities Texas completed the restoration of the Byrne-Reed House to its original grandeur in August 2010. The elegant public spaces on the first floor, including the Julius and Suzan Glickman Room, provide a grand setting for council events and those of other organizations. These grand spaces are also used to hold seminars, conferences, and workshops for Texas teachers, and the large basement houses a workshop and our traveling exhibitions that travel to schools, libraries, and museums throughout Texas and the nation.

The success of the Texas educational system depends on nurturing qualified teachers and keeping them in the classroom. For more than two decades, Humanities Texas has addressed these challenges by supporting the work of the state’s social studies and language arts teachers through a range of educational initiatives—its Teacher Professional Development Program, in particular. Throughout the year, Humanities Texas conducts in-person and online programs offering teachers the opportunity to work closely with leading scholars, exploring topics at the heart of the state's social studies and language arts curricula. Teachers have the opportunity to attend dynamic lectures, participate in faculty-led workshops, and explore the resources of the state’s major cultural institutions. Participant evaluations are consistently superlative, with many teachers reporting that Humanities Texas programs provide the best professional development experience of their careers.

As noted above, Humanities Texas dramatically expanded our teacher programming with state support in 2010. Before then, the council had held no more than two residential teacher institutes in a single year. Since 2010, we have held more than 300 in-person and online programs serving more than 7,100 Texas teachers in over half of the state’s school districts. We are now recognized as the state’s leading provider of professional development for teachers of English and social studies subjects at the secondary level. No other organization provides programs with such consistently high quality on such a scale.

Another notable feature of our teacher programs is our focus on serving teachers in the greatest need of training and support—early-career teachers and those who work in historically low-performing schools or underprivileged communities. Between 2016–2020, 83% of participants taught in Title I schools, 51% were in their first five years of teaching, and 35% taught in schools with a state accountability rating of C or lower.

Federal law allows the Texas governor to appoint as many as six individuals to our volunteer board. The other members—representatives of the state’s academic and public sectors—are elected by the board as vacancies occur. Non-gubernatorial members serve terms of three years, with the possibility of each being re-elected to a second three-year term.

Answers to commonly asked questions about Humanities Texas can be found on our organization FAQ page.

The governing bylaws of Humanities Texas are available online. Former board members gather in 2004. 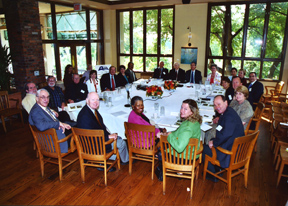 Board of Directors meeting in Austin in 2005. 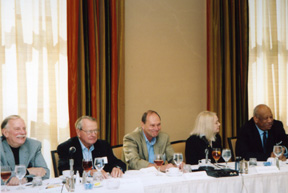 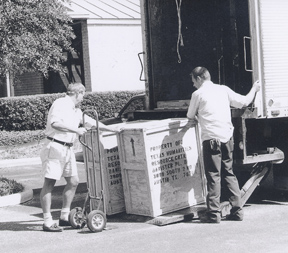 In 2003, the exhibitions of the Texas Humanities Resource Center were integrated within Humanities Texas's general operations. 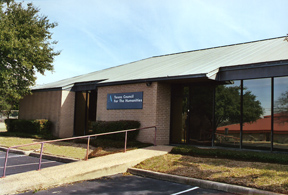 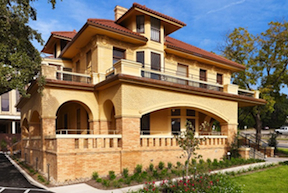 The restored Byrne-Reed House in downtown Austin is the current headquarters of Humanities Texas.