America from Jefferson to Jackson

In June 2016, Humanities Texas and the University of Houston held a professional development institute in Houston for Texas teachers covering U.S. history in the early nineteenth century.

The institute covered central topics in the early national period through Andrew Jackson's presidency, including efforts to define the authority of the federal government, the development of political parties, Thomas Jefferson's and James Madison's presidencies, the Marshall court, women in early nineteenth-century America, slavery, the American economy in the 1820s and 1830s, the Monroe Doctrine and U.S. foreign policy, Jacksonian democracy, the displacement of Native Americans, the rise of sectionalism, and manifest destiny.

Fifty-four teachers participated. The program emphasized close interaction with scholars, the examination of primary sources, and the development of effective pedagogical strategies and engaging assignments and activities. The program was designed ultimately to enhance teachers' mastery of the subjects they teach and to improve students' performance on state assessments. Content was aligned with the secondary social studies TEKS. Teachers received books and other instructional materials.

The institute took place from June 6–9, 2016, on the University of Houston campus. A schedule of the institute can be found here.

Program partners included the Bayou Bend Collections and Gardens and the Museum of Fine Arts, Houston. The institute was made possible with major funding from the State of Texas, with ongoing support from the National Endowment for the Humanities. The institute’s keynote lecture was supported in part with a generous grant from the Pulitzer Centennial Campfires Initiative. 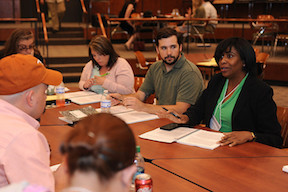 Nikki Taylor, professor of history at Texas Southern University, leads a seminar on slavery in the early nineteenth century at the "America from Jefferson to Jackson" institute in Houston. Jesus F. de la Teja, Jerome H. and Catherine E. Supple Professor of Southwestern Studies at Texas Statue University, leads a seminar on the Southwest in the early nineteenth century at the "America from Jefferson to Jackson" institute in Houston.