In June 2016, Humanities Texas partnered with The University of Texas at San Antonio to hold a professional development institute in San Antonio for Texas teachers covering U.S. history from the periods of exploration to revolution, with additional consideration of Texas during the Mexican national and revolutionary periods.

The institute covered topics central to the state’s eighth-grade social studies curriculum. Faculty lectures and workshops addressed European exploration and colonization of North America, the economic life of the British Colonies, the development of representative government and political institutions, the French and Indian War, the American Revolution, the situation of American Indians during the colonial and revolutionary periods, women in the Spanish borderlands, and the history of Texas during the Mexican national and revolutionary periods.

The institute emphasized close interaction with scholars, the examination of primary sources, and the development of effective pedagogical strategies and engaging assignments and activities. The program was designed ultimately to enhance teachers' mastery of the subjects they teach and to improve students' performance on state assessments. Content was aligned with the secondary social studies TEKS. Teachers received books and other instructional materials.

The institute took place from June 12–15, 2016, at The University of Texas at San Antonio. A schedule of the institute can be found here.

Program partners included the McNay Museum of Art and the Institute of Texan Cultures. The institute was made possible with major funding from the State of Texas, with ongoing support from the National Endowment for the Humanities. The institute’s keynote lecture was supported in part with a generous grant from the Pulitzer Centennial Campfires Initiative. 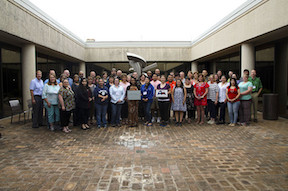 "From Colonists to Revolutionaries" institute participants at The University of Texas at San Antonio. 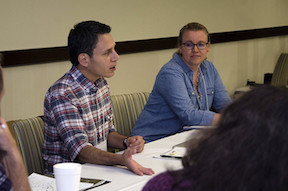 Alex Hidalgo, assistant professor of history at Texas Christian University, leads a seminar on Spanish exploration at the "From Colonists to Revolutionaries" institute in San Antonio.