The institute covered topics central to the state’s English III curriculum. Faculty lectures and workshops addressed the literature of slavery and abolition; the literature of the Civil War era; the Harlem Renaissance; American writing about immigration and the two World Wars; the rhetoric of the civil rights movement; American drama; Texas and Latino literature in the twentieth century; and using American art in teaching language arts.

Fifty teachers attended the institute. The institute emphasized close interaction with scholars and the development of effective pedagogical strategies and engaging assignments and activities. In their lectures and afternoon workshops, faculty placed special emphasis on teaching critical reading skills. The program was designed ultimately to enhance teachers' mastery of the subjects they teach and to improve students' performance on state assessments. Content was aligned with the secondary English and language arts TEKS. Teachers received books and other instructional materials.

View videos of faculty lectures from the workshop:

Following the institute, Humanities Texas began gathering resources related to the most commonly taught writers and texts in secondary-level ELA courses. The "Author Index" provides sets of teachable resources that track the history of particular authors and texts and their reception over time. Each author page includes the first and significant publications of commonly taught texts; early reviews of the author's work; excerpts of critical reviews of that author's work; and suggestions for lessons, discussion, and activities. Current author pages include Stephen Crane, Nathaniel Hawthorne, and Langston Hughes.

The institute took place from June 10–13, 2014, at the Julius Glickman Conference Center on the campus of The University of Texas at Austin. A schedule of the institute can be found here.

Program co-sponsors included The University of Texas at Austin College of Liberal Arts and the Harry Ransom Center.

This workshop was made possible with major funding from the Brown Foundation, Inc. of Houston and the State of Texas, with ongoing support from the National Endowment for the Humanities. 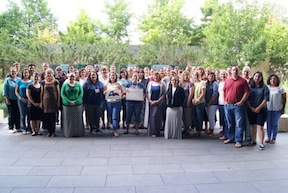 "Teaching the American Literary Tradition" institute participants gather outside the Julius Glickman Conference Center at The University of Texas at Austin. 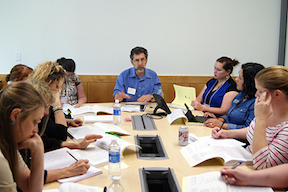 Robert S. Levine, professor of English and Distinguished University Professor at the University of Maryland, College Park, and general editor of the Norton Anthology of American Literature, leads a critical reading workshop focused on writings by Ralph Waldo Emerson and Frederick Douglass.