On June 13–16, 2017, Humanities Texas partnered with Texas A&M University and the Melbern G. Glasscock Center for Humanities Research to hold a professional development institute for Texas teachers covering World Wars I and II.

The institute covered topics central to World Wars I and II, including the causes and effects of the wars, the reasons for U.S. involvement, major military operations, the literature of World War I, Wilson’s Fourteen Points and the Treaty of Versailles, isolationism and neutrality, the role of women during the wars, the Holocaust and post-war representations of the Holocaust in photography and film, mobilization and the atomic bomb, and the leadership of FDR and Truman during World War II.

The institute took place on the campus of Texas A&M University in College Station from June 13–16, 2017. The schedule is available here. 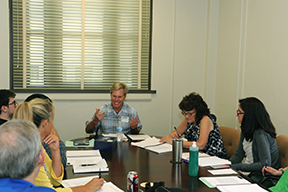 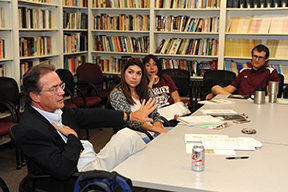 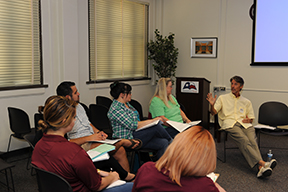 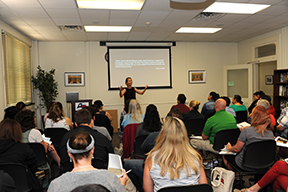 Stefanie Harris, associate professor of German and film at Texas A&M University, delivers a lecture on “Post-War Representation of the Holocaust” in College Station.