Ninety-three teachers attended the workshops. The workshops emphasized close interaction with scholars, the examination of primary sources, and the development of effective pedagogical strategies and engaging assignments and activities. Content was aligned with the secondary social studies TEKS, with particular emphasis on the eleventh-grade curriculum. Teachers received books and other instructional materials and were trained in the examination and interpretation of primary sources.

These workshops were made possible with major funding from the State of Texas, with ongoing support from the National Endowment for the Humanities. Humanities Texas thanks ESC5 and the MFAH for hosting the programs. 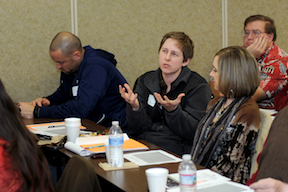 Melanie Pharis of Beaumont's West Brook High School asks a question after a lecture at the Beaumont workshop. Participants in the Houston workshop at the Museum of Fine Arts, Houston.