The U.S. in World War II

Topics addressed the turning points of the war in Europe, mobilization and the home front, and the war in the Pacific.

One hundred teachers attended the workshops. The workshops emphasized close interaction with scholars, the examination of primary sources, and the development of effective pedagogical strategies and engaging assignments and activities. Content aligned with the TEKS. Teachers received books and other instructional materials.

The workshop was made possible with major funding from the State of Texas, with ongoing support from the National Endowment for the Humanities. Humanities Texas thanks the Dallas Institute of Humanities and Culture for hosting the Dallas program. 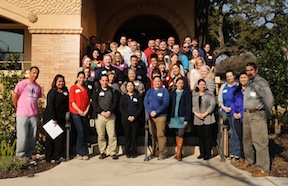 Workshop participants at the Byrne-Reed House in Austin. 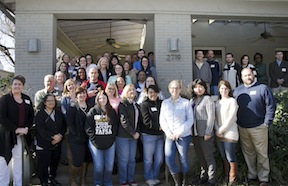 Workshop participants gather at the Dallas Institute of Humanities and Culture.

Brian Linn leads a seminar at the Dallas workshop examining declassified intelligence documents related to the attack at Pearl Harbor.