Alan Lomax believed every culture has a "right . . . to equal time on the air and equal time in the classroom." As director of the Library of Congress Archive of American Folk Song and as a radio and television host, Lomax introduced folksong to popular audiences and promoted it among students and scholars.

His interest in traditional song started when Lomax was a teenager. In the 1930s, Alan accompanied his father, the prominent folklorist John Lomax, on trips to collect folk songs from prisoners, laborers, and cowboys.

As he matured and developed his own professional identity, Alan Lomax also collected oral histories about the stories behind the songs.

Lomax believed that oral traditions are critical to a nation’s literary and cultural heritage. He feared that modern technology and the commercial music industry would erode traditional practices and deplete musical diversity. Lomax's work to preserve folksong also provided individuals and communities with opportunities to share their creative traditions with a wider audience.

When Alan Lomax died in 2002, his collection included tens of thousands of musical recordings, preserved for future generations. A contemporary wrote, Alan "was in it for the music, not the money. His gift to all of us was to capture voice after voice, song after song that would have vanished into thin air otherwise."

For More about Alan Lomax

In the 1980s, Alan Lomax founded the Association for Cultural Equity (ACE) to explore and preserve the world's expressive traditions with humanistic commitment and scientific engagement. ACE is now custodian of the Alan Lomax Archive, a priceless collection of recorded music, dance, and the spoken word. The archive is now available online.

The Alan Lomax Collection at the Library of Congress American Folklife Center contains manuscripts, sound recordings, graphic images, and moving images of ethnographic material created and collected by Lomax and others in their work documenting song, music, dance, and body movement from many cultures. The collection includes field recordings and photographs Lomax made in the Bahamas, the Caribbean, England, France, Georgia, Haiti, Ireland, Italy, Morocco, Romania, Russia, Scotland, Spain, the United States, and Wales from the 1930s forward.

NPR's Morning Edition recorded a segment about Lomax and the Association for Cultural Equity (ACE) during the digitization of Lomax's sound archives. The segment features several of Lomax's friends and coworkers at ACE reflecting on the history of Lomax's project and his vision for its future, as well as ACE's current attempts to live up to his vision.

Filene, Benjamin, "Our Singing Country: John and Alan Lomax, Leadbelly, and the Construction of the American Past." American Quarterly 43 (1991): 602–624. 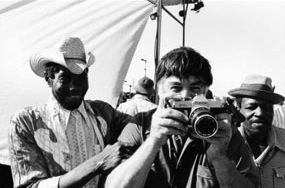 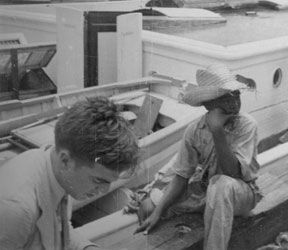 Alan Lomax (left) with a young man on board a boat during a 1935 Bahamas recording expedition. Library of Congress Prints and Photographs Division. 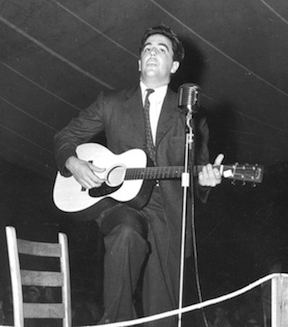 Alan Lomax playing guitar on stage at the Mountain Music Festival, Asheville, North Carolina, between 1938 and 1950. Prints and Photographs Division, Library of Congress.