In 1888, the historical novel Remember the Alamo was published to popular and critical acclaim. Set during the Texas fight for independence, the book includes vivid portraits of Santa Anna, Sam Houston, and Davy Crockett. The novel's unlikely author was Amelia Barr, a British writer who lived in Texas in the mid-nineteenth century.

Barr moved to America with her husband and daughters in 1853. They lived briefly in Chicago and Memphis before settling in Austin.

In Texas, Barr was enthralled by tales of the state's history. She plunged into Austin's social life and recorded sharp-eyed accounts of the city in her diary in the turbulent years before and during the Civil War.

In 1867, Barr's husband and three of her children died of yellow fever in Galveston. Barr moved to New York soon after and, as she put it, "was reborn" into a life of duty. To support herself, she launched her remarkably successful writing career, publishing an average of two books per year over three decades. Richly detailed historical romances such as Remember the Alamo became her specialty.

Barr died in 1919. In her memoir, completed at age eighty, she wrote that she hoped her life story might help "any sad or doubtful woman to outleap her own shadow, and to stand bravely out in the sunshine to meet her destiny."

For More about Amelia E. Barr

The Amelia Edith Huddleston Barr Papers are held in the Dolph Briscoe Center for American History at The University of Texas at Austin. They include letters written by Barr, some of which describe events in Austin in 1861, in Galveston during Reconstruction, and in New York at the turn of the century.

Many of Amelia E. Barr's books, including Remember the Alamo, are freely available online from Project Gutenberg.

Select newspaper articles about Amelia E. Barr from 1914 until her death in 1919 are available on the Richmond Hill (NY) Historical Society’s website. 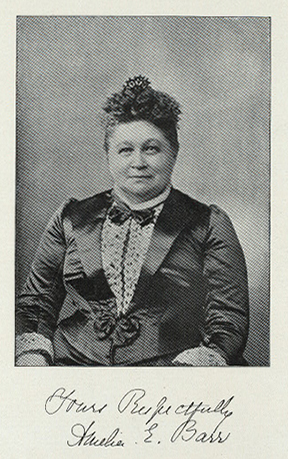 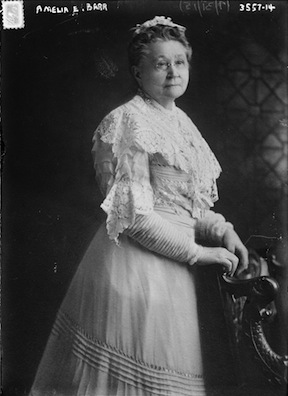 Portrait of Amelia E. Barr between ca. 1910 and ca. 1915. Image courtesy of the Library of Congress.