Jack Johnson was born in Galveston in 1878. He went on to become the greatest boxer in the world and one of America's most famous celebrities. Johnson won the World Colored Heavyweight Championship in 1903 but could not claim the overall title because white fighters refused to face him in the ring.

That changed in 1908 when Johnson beat Tommy Burns to become the first African American World Heavyweight Champion. He defended his title against all comers, including retired champ James Jeffries. Jeffries announced his sole purpose for coming out of retirement was "proving a white man is better than a Negro." Johnson knocked Jeffries down twice before Jeffries gave up in the fifteenth round.

The New York Times hoped Johnson’s win would "stimulate respect for equality and fairness." To the contrary, unrest and violence followed. Johnson's taste for fast cars and high living fueled the outrage.

In 1913, his relationships with white women led to a trumped-up charge of "transporting women across state lines for immoral purposes." Johnson's only real crime was his success, yet he spent a year in Leavenworth prison.

Despite declining skills, Johnson continued boxing into his fifties. In 1946, at the age of sixty-eight, Johnson died in a car wreck.

In 2002, the city of Galveston renamed 41st Street Jack Johnson Boulevard in honor of its most famous native son.

For More about Jack Johnson

In 2005, Ken Burns directed a documentary, Unforgivable Blackness: The Rise and Fall of Jack Johnson, exploring Johnson’s life. PBS produced the documentary and offers further material on the film’s website.

The Library of Congress and National Endowment for the Humanities have posted newspaper clippings related to Johnson's career as part of their Chronicling America project.

In 2012, the city of Galveston dedicated a park in honor of Jack Johnson. The park, which features a life-size bronze statue of the boxer, is located near the Old Central Cultural Center on Avenue M. In 2014, the Texas Historical Commission unveiled a historical marker recognizing Johnson's achievements as part of its Undertold Markers program, which aims to "address historical gaps, promote diversity of topics, and proactively document significant underrepresented subjects or untold stories."

In 2004, Ken Burns led an effort to seek an official, posthumous pardon for Johnson from President George W. Bush. Johnson’s family and several advocates, including Sen. John McCain, joined the effort, but the pardon was not granted. Burns and McCain appealed again under President Barack Obama, and in 2015 Congress passed a bipartisan resolution in support of the pardon. However, President Obama never commented on clemency for Johnson and did not grant him a pardon in 2017. Posthumous pardons are rare, but some journalists and historians believe that Johnson’s pardon has been ignored because his brash and rebellious nature overshadows his qualifications for a pardon.

On May 24, 2018, President Donald J. Trump issued a posthumous pardon to Johnson. 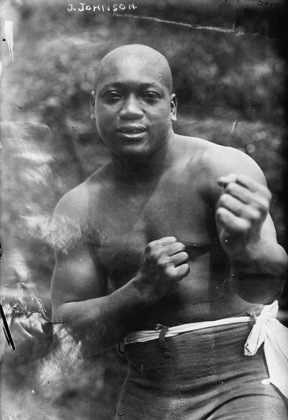 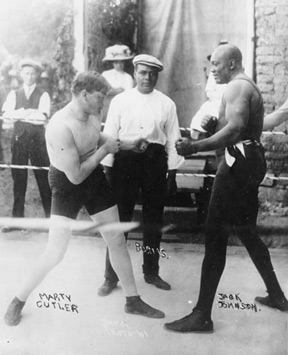 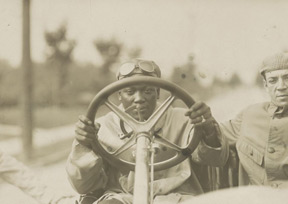