In July 1974, as the Watergate hearings took place, one voice stood out expressing faith in American ideals. That voice—deep, measured, and unmistakable—belonged to Texas Congresswoman Barbara Jordan. "My faith in the Constitution is whole," Jordan declared, "it is complete, it is total. And I am not going to sit here and be an idle spectator to the diminution, the subversion, the destruction of the Constitution." Jordan's words electrified Congress and a national televised audience, and helped bring about President Nixon's resignation.

Jordan was born in Houston’s Fifth Ward in 1936 and attended segregated schools until she enrolled at Boston University Law School.

Jordan mastered the art of political compromise, but never wavered in her commitment to the Constitution.

In 1979, Jordan retired from elective office to begin a teaching career, after being diagnosed with multiple sclerosis. When she died, in 1996, her burial in the Texas State Cemetery marked yet another first: she was the first black woman interred there.

For More about Barbara Jordan

AmericanRhetoric.com offers a video recording of Jordan's "1976 Democratic National Convention Keynote Address" given in New York, New York, on July 12, 1976, and an audio version of Jordan's "Statement on the Articles of Impeachment" to the House Judiciary Committee on July 25, 1974.

The Lyndon B. Johnson School of Public Affairs offers a transcript and audio of Barbara Jordan's Landmark Speech to the 1976 Democratic National Convention.

Texas Southern University offers a virtual exhibition for download based on materials from its Barbara Jordan Archives.

"Barbara Charline Jordan." In Black Americans in Congress, 1870–2007. Prepared under the direction of the Committee on House Administration by the Office of History & Preservation, U. S. House of Representatives. Washington: Government Printing Office, 2008. 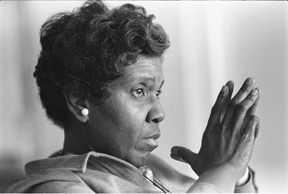