When Belle Starr was shot to death in 1889, a newspaper declared her to be "a most desperate woman." Her killer was never identified. Many suspected her son, whom Belle had recently beaten for mistreating her horse. Her unsolved murder was a fitting end to a life that was a whirlwind of violence, crime, and legend.

She was born Myra Maybelle Shirley in 1848 and at the age of sixteen moved to the North Texas town of Scyene. She kept company with notorious criminals, including Jesse James. She married three times to three different outlaws and even spent time in prison for stealing horses.

Though she was ruthless to her enemies, she had a great capacity to make friends, and she even mingled with the Dallas elite during the brief periods when her gunfights and thievery gave way to respectable living.

But it was only after her death, at age forty, that her legend grew. The National Police Gazette invented new stories about her, and her embellished reputation continued to inspire popular novels and western films long after her death.

Stories circulated depicting Belle as an elegantly dressed woman riding atop a black mare, in a feathered black sombrero, toting a Colt .45 pistol that she called "my baby."

Instead of being remembered as a desperate criminal, she became a romantic symbol of the disappearing American West, known as "Belle Starr, the Bandit Queen."

For More about Belle Starr

The Portal to Texas History has links to nineteenth-century newspaper articles about Belle Starr’s life and death.

Shirley, Glenn. Belle Starr and Her Times: The Literature, the Facts, and the Legends. Norman: University of Oklahoma Press, 1982. 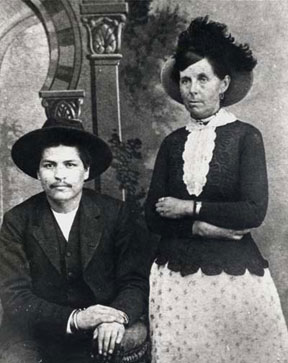 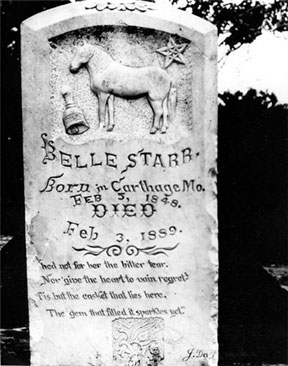