The series of pastels titled Twenty-four Hours with the Herd depicts an iconic Texas scene: the cattle drive. Artist Frank Reaugh completed the series in the 1930s, but they portray an earlier chapter of Texas history, when fences had not yet crossed the landscape, and men and cattle moved freely on the open range.

Born in Illinois in 1860, Reaugh moved to Texas when he was fifteen. His family grew cotton, but young Reaugh was interested in art and nature, and divided his time between the family farm and studying art in St. Louis and Paris.

Reaugh soon gained a reputation for his luminous and impressionistic landscapes. Several were exhibited at the World's Fairs of 1893 and 1904. Another favorite subject was the Texas longhorn, which he studied carefully while following the herds along the Red, Wichita, and Brazos Rivers. His most famous works feature this emblem of the state in its natural habitat, the Texas plains.

Known as the "dean of Texas artists," Reaugh was also a popular art instructor. He founded the Dallas School of Fine Arts and often led students on sketching trips throughout his beloved Southwest.

A master of color, shading, and detail, Frank Reaugh recorded what he called "the broad opalescent prairies" as he saw them more than a century ago. His works are on view at the Texas Capitol and museums around the state.

For More about Frank Reaugh

Frank Reaugh's works are on display around the state. The Harry Ransom Center at The University of Texas at Austin holds over two hundred, including his iconic series Twenty-four Hours with the Herd. Several of Reaugh's works are held by the Texas State Capitol Art Collection, and more than seven hundred are displayed on a rotating basis in the Frank Reaugh Gallery at the Panhandle-Plains Historical Museum in Canyon.

The forthcoming documentary Frank Reaugh: Pastel Poet of the Texas Plains will feature interviews with students, curators, and gallerists; period photographs, ephemera, and music; as well as pastel landscapes and nature studies held in public and private collections throughout Texas.

Reaugh, Frank. From Under a Mesquite Tree: An Artist's Life on the Texas Plains. As told to Lucretia Donnell. Edited by Gardner Smith and Robert Reitz. Oak Cliff, TX: Sun and Shadow Press, 2005. 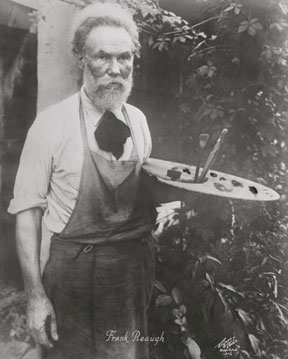 Frank Reaugh with palette, 1916. Harry Ransom Center at The University of Texas at Austin.

Frank Reaugh, Driving the Herd, ca. 1932. Harry Ransom Center at The University of Texas at Austin.