"Remember the Alamo" was the rallying cry at the 1836 Battle of San Jacinto. However by 1903, the neglected Alamo was nearly torn down and replaced by a hotel. The state had already purchased the church, but refused to pay for the rest of the grounds, where most of the famous battle occurred.

At that point, twenty-two-year-old Clara Driscoll, whose grandfather had fought in the battle of San Jacinto, stepped forward with her own money to protect the sacred site. She collaborated with the San Antonio chapter of the Daughters of the Republic of Texas to protect the historic mission. For her generosity, Driscoll is known as the "Savior of the Alamo."

Driscoll was born in 1881, the only daughter of Corpus Christi millionaire Robert Driscoll. Educated in Europe, Clara understood the importance of preserving historical sites. She wrote: "By the care of our eloquent but voiceless monuments, we are preparing a noble inspiration for our future."

Driscoll is also remembered for the beautiful Laguna Gloria villa she and her husband built on the Colorado River in Austin. This mansion and its grounds became the original home of The Contemporary Austin, formerly the Austin Museum of Art. But Clara Driscoll is best remembered for rescuing the Alamo, "the shrine of Texas Independence," as she described it. When Driscoll died in 1945, her body lay in state at the mission's chapel, in recognition of her work to preserve it.

For More about Clara Driscoll

The Contemporary Austin, formerly the Austin Museum of Art, welcomes visitors at to its Laguna Gloria campus.

The Sarah Eagar and Florence Eagar Roberts Alamo Papers, 1905–1913 at The University of Texas at Austin document the activities of the Daughters of the Republic of Texas (DRT) and their custody of the Alamo. The collection includes newspaper clippings documenting the DRT's efforts to gain custodianship of the Alamo and the state government's involvement with the property.

The Daughters of the Republic of Texas Library at the Alamo features historic photographs of Clara Driscoll and the Alamo restoration.

Looscan, Adèle B. "The Work of the Daughters of the Republic of Texas in Behalf of the Alamo." The Quarterly of the Texas State Historical Association 8, no. 1 (July 1904): 79–82. 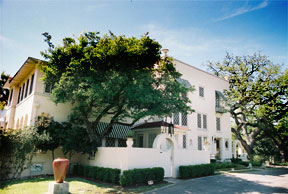