Cynthia Ann Parker is the most famous Indian captive in American history.

She was born in Illinois, around 1827. In 1833, her family moved to Texas and built Fort Parker in what is now Limestone County, east of Waco. Comanche warriors attacked the fort in 1836 and took young Cynthia Ann captive.

Parker spent the next twenty-four years with the Indians, eventually marrying the warrior Peta Nocona, with whom she had two sons and a daughter. White traders and soldiers spotted Parker several times during these years, but she refused to abandon her Comanche family. In 1860, however, Texas Rangers and federal soldiers abducted her, with her infant daughter, in an attack on a Comanche encampment in north Texas.

Parker was reunited with the white family she no longer remembered. Sadly, she struggled to readjust. A number of times she tried to escape with her daughter and return to the Comanche and her two sons.

Parker died in 1871 and was buried in Anderson County in East Texas. Her son Quanah—who became the most important Comanche leader of his day—later had her reinterred near his home in Oklahoma. In 1957, the federal government relocated her remains, along with those of Quanah and some seven hundred other Comanches, to the cemetery at Fort Sill.

For more about Cynthia Ann Parker

The Dolph Briscoe Center for American History at The University of Texas at Austin holds a biographical file on Cynthia Ann Parker. It contains a number of newspaper clippings, magazine articles, typed manuscripts, and other materials, some dating back to the 1920s, about Parker and her life.

The Texas Plains Trail Region has developed the Quanah Parker Trail, a road trip guide that features places with ties to Cynthia Ann and Quanah Parker, the Comanches, and other Plains Indian tribes.

Gwynne, S. C. Empire of the Summer Moon: Quanah Parker and the Rise and Fall of the Comanches, the Most Powerful Indian Tribe in American History. New York: Scribner, 2011. 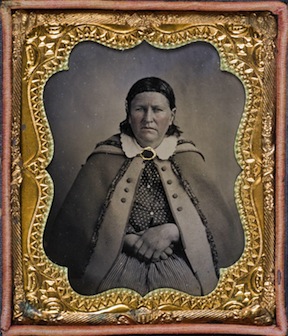