Born in 1928, the artist Donald Judd was nurtured in the cultural hotbed of New York City. But the austere, high desert of West Texas became his artistic home.

In the sixties, Judd began creating pared-down, geometric sculptures out of metal and Plexiglas. He didn't intend these works to represent anything; instead, they were things in themselves, meant to be experienced rather than analyzed.

On a road trip in the early seventies, Judd passed through the West Texas town of Marfa and was captivated by the area's broad spaces and shifting sunlight. He soon settled there and bought local properties and ranchland, including a decommissioned Army base. Judd developed the site as the Chinati Foundation, a showcase for his own artworks and those of others.

Chinati's centerpiece is Judd's series of one hundred aluminum boxes, housed in two vast former artillery sheds. The large boxes are arranged in neat rows, with their interiors exposed. Their effect on the visitor is cumulative. As one critic writes, the "shimmering boxes form a giant multifaceted mirror that reflects the vast panorama surrounding the site." The work is abstract, yet it quietly evokes "the transcendental majesty of the American West."

Judd passed away in 1994. But his works continue to attract thousands of visitors each year to Marfa and this unlikely cultural outpost.

For more about Donald Judd

The Chinati Foundation in Marfa features temporary exhibitions, in addition to the permanent installations by Donald Judd and other artists. An illustrated description of Judd's one hundred untitled works in mill aluminum is available on the Chinati website.

The Judd Foundation maintains and preserves Donald Judd's private living and working spaces in New York and Marfa. It also offers scholarly and educational programs that foster a broader understanding of Judd's legacy as an artist. 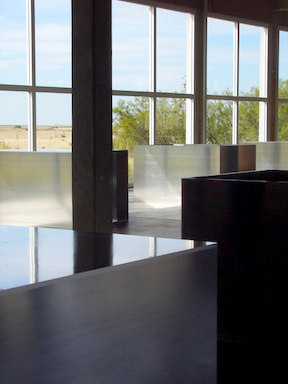