When the Texas House of Representatives met in January 1973, three of the new members were the first African Americans elected to the House since Reconstruction. One of these, twenty-eight-year-old Mickey Leland, entered the Capitol wearing an Afro and a vibrant dashiki. The New York Times described him as "a jolt to the conservative Texas body."

Raised in Houston, Leland was committed to providing jobs for minorities and health care for the poor. After earning a degree in pharmacy from Texas Southern University, he pushed city officials to establish public health clinics in low-income communities.

Leland remained in the state legislature until 1978, when he won Barbara Jordan's seat in the U.S. Congress. In Washington, he continued to fight for social justice and minority rights.

Leland is best remembered for his fight to end global starvation. He helped create the House Select Committee on World Hunger and in 1985, urged Congress to send $800 million in famine relief funds to Africa. Tragically, on his sixth trip to Africa, a plane carrying Leland and fifteen others crashed en route to a refugee camp in Ethiopia.

Leland often quoted the Talmud, saying, "If you save one life, you save the whole world." Today, the Congressional Hunger Center honors his legacy through the Mickey Leland International Hunger Fellows Program, which trains leaders in ending global starvation.

For More about Mickey Leland

The Mickey Leland Center for Environment Justice and Sustainability at Texas Southern University holds Leland’s archives and papers, which include files from his congressional career, photographs, articles, speeches, and memorabilia.

"Leland, George Thomas (Mickey)." In Black Americans in Congress, 1870–2007. Prepared under the direction of the Committee on House Administration by the Office of History & Preservation, U. S. House of Representatives. Washington: Government Printing Office, 2008. 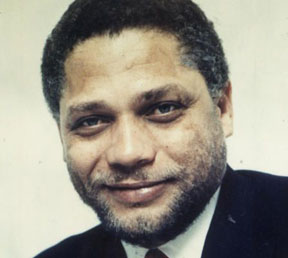 Mickey Leland during his time in the U.S. Congress. Office of the Clerk, U.S. House of Representatives. 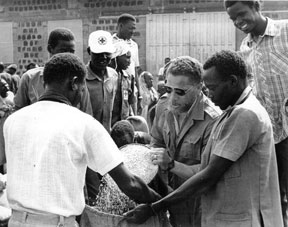 Mickey Leland on one of the six trips to Africa he took as a member of Congress. Image courtesy of the Mickey Leland Center on World Hunger and Peace at Texas Southern University. 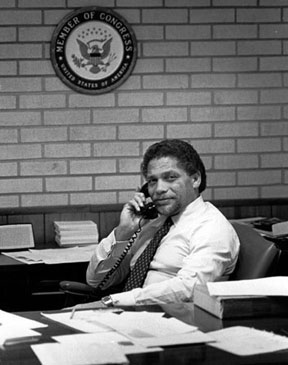 Mickey Leland in his office. Image courtesy of the Mickey Leland Center on World Hunger and Peace at Texas Southern University