Among the most important Anglo settlements in Spanish Texas was DeWitt's Colony, founded in 1825 by Green DeWitt and James Kerr along the Guadalupe River.

Before coming to Texas, DeWitt fought in the War of 1812 with the Missouri militia.

By 1821, DeWitt was aware that Moses Austin had obtained a grant to bring colonists to Spanish Texas. DeWitt petitioned Mexican authorities for a similar grant and eventually received an empresario contract to establish a settlement of his own.

DeWitt and his wife Sarah moved their family to the colony in 1826. But the colony soon struggled, and by 1831, DeWitt had lost his contract. Sarah, however, successfully petitioned the Mexican government for a land grant in her maiden name of Seely as a hedge against her husband's misfortunes.

In 1835, Green DeWitt died while in Mexico to purchase land for future settlements.

Soon after his death, Sarah played a role in the first battle of the Texas Revolution. As Mexican authorities threatened to retrieve a cannon they had given to Gonzales citizens, Sarah cut up her daughter Naomi’s wedding dress to create the famous banner that bore the daring slogan "Come and Take It."

Sarah Seely DeWitt is now buried in a cemetery named for her husband south of Gonzales, on land that the Mexican government once granted her.

For more about Green and Sarah DeWitt

The Green C. DeWitt Papers are held by the Briscoe Center for American History at The University of Texas at Austin. The collection includes letters and legal documents relating to DeWitt’s Colony. 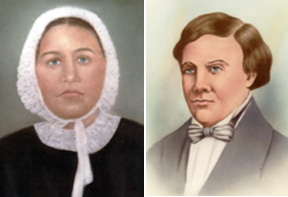