The Gutenberg Bible, completed in 1454, is the first substantial book printed with movable type. Of the twenty-one complete copies in existence, one is on view at The University of Texas at Austin's Harry Ransom Center. This book—and the center that houses it—are the proud legacy of Chancellor Harry Huntt Ransom, known as "The Great Acquisitor."

Born in Galveston in 1908, Ransom came to UT in 1935 as an English instructor. Over the years he served as dean, provost, president, and chancellor. Ransom firmly believed that a strong library system was critical for a successful education, and he spent his career working to strengthen the university’s collection.

Ransom founded the Humanities Research Center in 1957. He knew he could not compete with the rare collections that institutions such as Harvard and Yale had built over many years, so he focused on modern authors. The result is one of the world's finest collections of twentieth-century writing, with materials from such luminaries as James Joyce, Samuel Beckett, and George Bernard Shaw.

Ransom's ultimate purpose was not simply to amass valuable books and manuscripts. He sought a collection of what he called "knowledgeable people."

After Ransom's death in 1976, the Humanities Research Center was renamed in his honor. Today, its treasures continue to draw scholars to The University of Texas, creating a continuing flow of knowledgeable people of which Ransom would have been proud.

For More about Harry Huntt Ransom

The Harry Ransom Center on The University of Texas at Austin campus offers exhibitions and public programs. The reading room and galleries are free and open to the public six days a week.

Both the Ransom Center and the Dolph Briscoe Center for American History hold collections of Ransom's papers documenting his academic career.

Ransom, Harry Huntt. The Conscience of the University and Other Essays. Edited by Hazel H. Ransom. Austin: University of Texas Press, 1982. 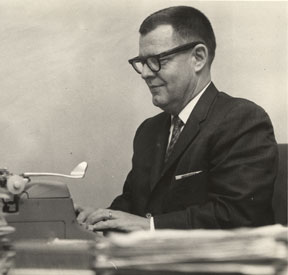 Harry Ransom at his typewriter, n.d. Image courtesy of the Harry Ransom Center at The University of Texas at Austin. 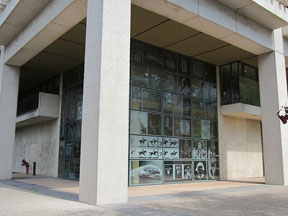 The Harry Ransom Center at The University of Texas at Austin. Photo by Leslie Johnston.