James Fannin led the rebels massacred at Goliad in 1836. His defeat inspired the victory that secured Texas independence.

Fannin moved to Texas in 1834 from Georgia. When the Texas Revolution erupted in 1835, his ambition put him at the center of the action. With Jim Bowie, Fannin fought at the Battle of Concepción and participated in the siege of San Antonio.

Fannin then wanted to take the fight to Mexico by attacking Matamoros. However, when he learned that Santa Anna was preparing a massive invasion, he retired to the presidio at Goliad. There, he led the largest contingent of Texas rebels in the Mexican Army's path.

After the Alamo fell, Houston ordered Fannin to fall back from Goliad to Victoria. But Fannin hesitated, waiting five days to begin his retreat. Mexican forces overtook him at the Battle of Coleto. Though Mexican general José de Urrea sought mercy for his prisoners, Santa Anna stood firm in his orders. On Palm Sunday of 1836, the Mexican Army executed Fannin and more than three hundred of his men.

A few weeks later, when Houston finally engaged Mexican forces at the Battle of San Jacinto, cries of "Remember the Alamo! Remember Goliad!" spurred his men into battle. Victory and Texas independence followed, a legacy of Fannin's sacrifice.

For More about James Fannin

Although Fannin and the battle of the Texas Revolution did much to secure Goliad in public memory, the place has a longer history as one of the earliest European settlements in Texas. The Goliad State Park and Historic Site preserves the mission complex of La Bahía that had been so important as San Antonio's link to the Gulf of Mexico.

The Briscoe Center for American History at The University of Texas at Austin houses Fannin's papers. These consist of copies of correspondence between Fannin and Stephen F. Austin, James Bowie, and Sam Houston, as well as the surrender terms agreed to between Fannin and Urrea.

The Fannin Battleground State Historic Site lies a few miles east of Goliad, on the plain where Urrea and Fannin faced off in dramatic battle. Like so many Texas historic sites, this one was rediscovered and reinvigorated during the Centennial celebrations of 1936. A modest obelisk and manicured grounds mark the battlefield site.

The place most associated with Fannin is the presidio, or fort, that he and his men occupied first to defend the Texas revolt and then again as prisoners in the days before their unexpected execution. The Catholic diocese of Victoria maintains the site. In the 1960s, the Kathryn O'Connor Foundation restored the old presidio to its original glory, making it one of the most painstakingly restored forts in the United States. Historical societies hold re-enactments of historical events and colonial life there throughout the year.

Notes from an Unfinished Study of Fannin and His Men, Harbert Davenport's classic study of the rebels who served under Fannin, first appeared in the Southwestern Historical Quarterly in 1939, a year after Davenport had delivered the address at the newly constructed memorial at the Goliad Massacre gravesite. Thanks to the Texas State Historical Association Davenport's extensive research is now available online.

Long, Jeff. Duel of Eagles: The Mexican and U.S. Fight for the Alamo. New York: William and Morrow Company, Inc., 1990. 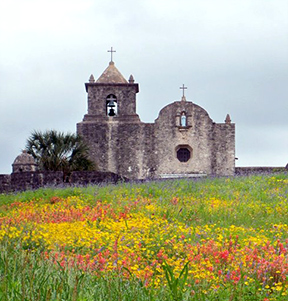