Cazneau was born in New York in 1807. Working as a journalist in the 1840s and 50s, she campaigned tirelessly for Texas independence. Her columns in periodicals such as the New York Sun helped sway public opinion in support of Texas statehood—and America's "manifest destiny" more generally.

Cazneau's campaign was hardly selfless. She speculated in Texas land and in 1834, even explored the possibility of settling her family in Stephen F. Austin's colony.

In 1850, she and her husband moved to Eagle Pass to open a trade depot and explore mining opportunities along the border. She later wrote a memoir recounting her experiences. Of Texas, she wrote, "There is no country under the sun in which a sober, sensible, and industrious man can more certainly realise a quick independence and a delightful home."

During the Mexican War, Cazneau became an unofficial diplomat, when President Polk sent her on a secret peace mission to Mexico City. She became the only American journalist to issue dispatches from behind enemy lines.

In later years, Cazneau lived mostly in the Dominican Republic, where she continued to promote American expansion. She passed away in 1878. One historian has since remembered her as "perhaps the most unusual and mysterious woman" in nineteenth-century America.

The Jane McManus Storm Cazneau Papers are held by the Briscoe Center for American History at The University of Texas at Austin. The papers consist of letters from Cazneau, a copy of her will, and transcripts of documents. Original letters to Moses S. Beach and others and handwritten editorials (1849–1865) concern contemporary politics, Texas, the colonization and accession of Cuba, the Dominican Republic, and Nicaragua. Photocopied and photographed letters from Cazneau (1834–1836) discuss land and loans to aid the Texas struggle for independence.

Former president of the Republic of Texas Mirabeau B. Lamar dedicated his 1857 book of poems Verse Memorials to Jane Cazneau. The full text of Verse Memorials, including the dedication, is available online through Documenting the American South, a project sponsored by the University Library at the University of North Carolina at Chapel Hill. 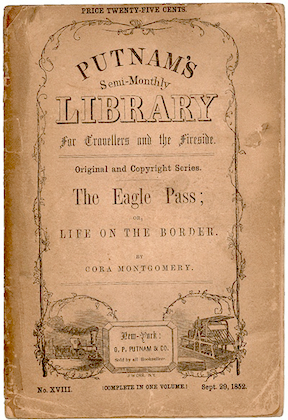 Cover of Eagle Pass; or, Life on the Border by Jane Cazneau (published under the pseudonym Cora Montgomery). New York: Putnam, 1852. Courtesy of Dorothy Sloan. 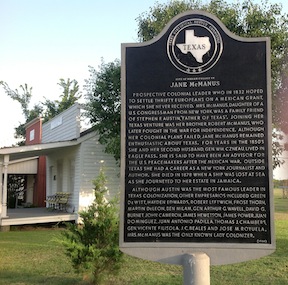