Texas became a two-party state in 1961, when conservative Republican John Tower was elected to the U.S. Senate. He was the first Republican senator from Texas since Reconstruction.

Born in 1925, Tower grew up in East Texas, the son of a Methodist minister. He served in the Navy during World War II and then earned a master’s degree in political science from SMU. Tower was teaching at Midwestern State University in Wichita Falls when he decided to enter politics. He ran for the U.S. Senate in 1960, losing to Lyndon B. Johnson. But Tower won the seat the following spring, in a special election called after Johnson assumed the vice presidency.

During four senate terms, Tower was a dominant voice for conservative Texas Republicans. He chaired the powerful Armed Services Committee and promoted the energy and banking industries. Intelligent and sometimes prickly, Tower was a master at moving legislation through Congress. He was a political mentor to Senator John McCain, and to many Texas Republicans including future President George H. W. Bush.

Tower retired from the Senate in 1985. Four years later, President Bush nominated him for Secretary of Defense, but the Senate rejected the nomination. Tower was deeply wounded by the defeat.

In 1991, Tower died tragically, along with his daughter Marian, in a commuter plane crash in Georgia.

For More about John Goodwin Tower

The John G. Tower Papers are held by the A. Frank Smith Jr. Library Center of Southwestern University in Georgetown, Texas. They consist primarily of materials accumulated during Senator Tower’s twenty-four years in the U.S. Senate and include printed materials, videotapes, audiocassettes, films, photographs, and some Senate committee records that document Senator Tower’s accomplishments and activities.

The Texas Tribune has assembled a slideshow of campaign literature from Tower's successful 1961 Senate race. The slideshow contains campaign fliers, brochures, and position statements, as well as a photograph of Tower being sworn in by his predecessor, Lyndon B. Johnson.

Cunningham, Sean P. Cowboy Conservatism: Texas and the Rise of the Modern Right. Lexington: The University Press of Kentucky, 2010. 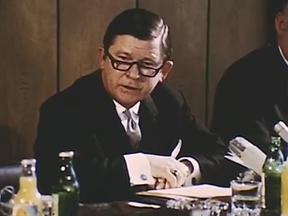 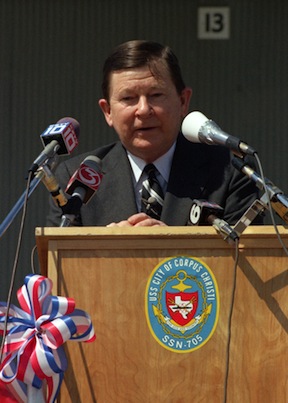 Senator John Tower speaks during a ceremony welcoming the nuclear-powered attack submarine USS City of Corpus Christi (SSN 705) to its namesake city, March 16, 1983. Records of the Office of the Secretary of Defense, 1921–2008. National Archives and Records Administration.