Texas revolutionary Juan Seguín was a politician, a soldier, a businessman, even a suspected traitor. Yet he was also a hero and an honored veteran. The contradictions of Seguín's life illustrate how complicated loyalty was during the struggle for Texas independence—especially for Tejano citizens of the Republic.

Seguín was born in San Antonio in 1806. As a young man, he formed a militia of Texians to resist President Santa Anna's oppressive rule. Seguín was a dedicated and able soldier, and he joined fellow Texians at the Alamo. He escaped death only because Colonel William Travis sent him out of the fort to seek reinforcements.

After the war, Seguín served in the Texas Senate and as mayor of San Antonio, but his unwavering defense of Tejano rights earned him political enemies. Seguín also had business dealings in Mexico that aroused suspicion, and he was labeled a traitor. Fearing for his safety, he fled to Mexico in 1842.

Santa Anna remembered Seguín's role in the Texas revolution and as punishment, compelled him to join the Mexican army during the U.S.-Mexico War. Seguín was finally able to return to Texas in 1848.

After his death in 1890, Seguín was buried in the town that bears his name. A statue was erected as a tribute, showing belated respect for a founding father who once said, Texas treated me like "a foreigner in my native land."

For More about Juan Seguín

Erik Christianson's equestrian statue of Juan Seguín stands in the Seguin town square next to the courthouse. It was unveiled in 2000.

The Center for History Teaching and Learning at The University of Texas at El Paso has a teacher's guide on Juan Seguín.

The PBS website hosts a documentary film, Remember the Alamo, that gives a brief history of the Texas Revolution. The website includes short biographies of many individuals who fought in the revolution, including Seguín.

Erik Christianson's equestrian statue of Juan Seguín stands in the Seguín town square next to the courthouse. It was cast by the Stevens Art Foundry, which features information about and photos of the statue on its website. The statue was unveiled in 2000. 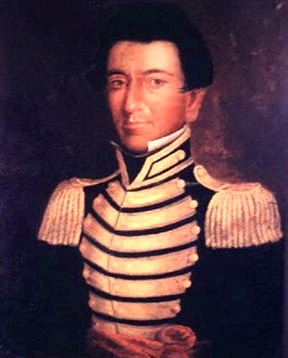 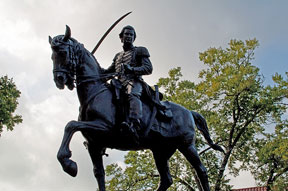