The singer who first performed the song "Ol' Man River" is an obscure figure today. Baritone Julius Bledsoe was among the first African Americans to appear on Broadway, but he made few recordings and his fame was soon eclipsed by the great Paul Robeson, who succeeded him in the role of Joe in the classic musical Show Boat.

Bledsoe was born in Waco around 1897 and attended Bishop College in Marshall. He took voice lessons while studying medicine at Columbia University in the early 1920s and made his professional debut at New York's Aeolian Hall in 1924. Three years later, Bledsoe appeared in the original production of Show Boat. A critic from the New York Morning Telegraph described him as "a singer who can pick the heart right out of your body—if you don’t look out."

Bledsoe was a composer as well. His song cycle African Suite premiered in Amsterdam in 1936, and he wrote an opera based on the novel Uncle Tom's Cabin. In the forties, Bledsoe had minor roles in films including Santa Fe Trail and Western Union.

Bledsoe died in 1943 and is buried in Waco. His tombstone is inscribed with a line from "Ol' Man River," the song that made him a star—"He just keeps rollin' along."

For More about Julius Bledsoe

The Jules Bledsoe Papers, 1918–1943, are held by The Texas Collection at Baylor University. It consists of manuscripts collected by Bledsoe during his musical career and includes correspondence, diaries, financial papers, photographs, music, and publicity materials.

Bledsoe is buried in Waco's Greenwood Cemetery, which was established in 1875 with equal acreage for both white and African American communities. Portrait of Julius Bledsoe. Courtesy of the Texas State Library and Archives Commission. 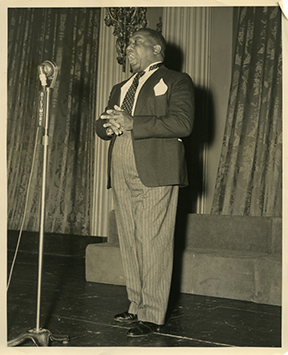