Karle Wilson Baker was Texas's most celebrated poet in the first half of the twentieth century.

Born in Arkansas in 1878, Baker followed her parents to Nacogdoches in her early twenties. She soon fell under the spell of her adopted state, writing about the role of Texans in the American drama.

In her novel Family Style, she portrays the impact of the East Texas oil boom on a single, small community. Another novel, Star of the Wilderness, is set against the backdrop of the Texas revolution.

But Baker was best known for her poetry. Writer Dorothy Scarborough praised Baker's attention to the details of ordinary lives, describing her as the "singer of quiet things." Baker's collection of poems Dreamers on Horseback was nominated for the 1931 Pulitzer Prize.

Baker was a popular professor at Stephen F. Austin State Teachers College. In 1952, she became a charter member of the Texas Institute of Letters.

For More about Karle Wilson Baker

The Karle Wilson Baker Papers are held by the Ralph W. Steen Library at Stephen F. Austin State University. They include diaries, manuscripts, correspondence, photographs, and other biographical materials.

Baker played an important role in the formation of the Texas Institute of Letters (TIL). In 1938, she was elected the first woman president of TIL, and in 1952 was named a Fellow of the organization.

A statue of Karle Wilson Baker stands in Nacogdoches on the corner of Mound and Hughes Streets, in front of Baker's family home. Images of this statue, photos of Baker, and information on her life can be found at the Stephen F. Austin Center for Regional Heritage and Research. 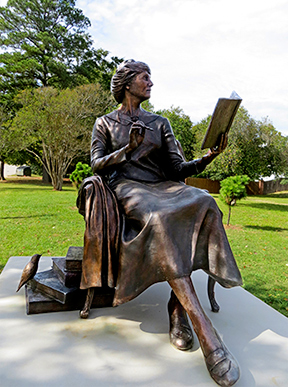