The memoirs of Mary Maverick paint a vivid picture of life on the Texas frontier.

Born in Alabama, Mary moved to San Antonio in 1838 after marrying Samuel Maverick, a veteran of the Texas Revolution.

Sam was a leading figure in the new Republic. He surveyed lands in the distant West and legislated in Austin. Because he was often away, Mary faced the challenges of raising a family alone. Only six of her ten children survived past the age of eight.

Mary chronicled her life in her diaries, which have become an important source for historians. She witnessed the bloody Council House Fight of 1840, a turning point in relations between Texians and the Comanche.

She also writes about Jack Hays, Juan Seguín, and Mirabeau Lamar; notable figures of Texas history appear in her pages not as distant monuments, but as friends and neighbors.

Mary Maverick worked in other ways to honor Texas history. She helped save the Alamo from development. She also promoted the Battle of Flowers—an annual parade still held in San Antonio commemorating the battles of the Alamo and San Jacinto.

Maverick died in 1898. Three years before her death she compiled and edited her memoirs with the aid of her son, leaving us with a remarkable account of life in early Texas.

The Maverick Family Papers, 1660–1938, are held at the Dolph Briscoe Center for American History at The University of Texas at Austin. They contain detailed information about several generations of the family's private and public life, including papers, diaries, court records, correspondence, sketches, reminiscences, newspaper clippings, and memorabilia.

A Texas history curriculum unit that explores the life of Mary Maverick, suitable for grades four or seven and aligned with the TEKS, is also available on the website of the Briscoe Center for American History. It contains handouts, lesson plans, and primary source documents.

The full text of the 1921 edition of The Memoirs of Mary A. Maverick is available online from the Internet Archive.

Mary and Sam Maverick played instrumental roles in the creation of St. Mark's Episcopal Church in San Antonio. The loss of several Maverick children led Mary to become very involved in the Episcopal community of San Antonio. She was among the members who brought premier architect Richard Upjohn to design their new church. Construction began in the 1860s, and the congregation dedicated the church in 1875. The Mavericks donated the church's original bell, forged from a cannon found near the Alamo. 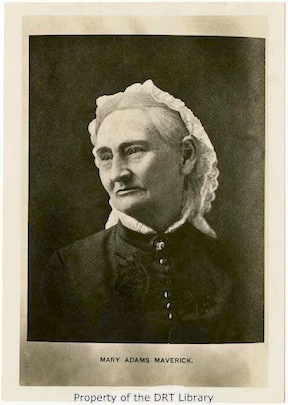