Miriam Amanda Wallace wasn't considering a career in politics when she enrolled at Baylor Female College in the 1890s. In 1899, she married James Ferguson and planned to settle down and raise a family. However, Miriam would make history, becoming the first woman governor of Texas.

Jim Ferguson was elected governor in 1914 and re-elected two years later. During his second term, he was impeached for misapplication of public funds and declared ineligible to hold public office in Texas.

A few years later, in 1924, Miriam stunned Texans when she announced she would run for governor. Promising "two governors for the price of one," Miriam became known as "Ma" Ferguson and urged voters to restore "Pa's" honor by voting for her.

During the campaign, Jim vowed to do the governing if Miriam won. Many women were furious at Jim's plan to govern over his wife's shoulder, but the unusual plan worked. At the age of forty-nine, "Ma" Ferguson became Texas governor.

Miriam "Ma" Ferguson retired from public office in 1935. Her political life was over but her place in Texas history was secure. Sixty years would pass before Texas elected Ann Richards as its second woman governor.

For More about Miriam ”Ma” Ferguson

The Texas State Libraries and Archives has an online display of the portraits and biographies of former Texas governors, including Miriam and James Ferguson.

The James Edward Ferguson Collection at the Dolph Briscoe Center for American History at The University of Texas at Austin contains campaign material, correspondence, newspaper clippings, and speeches that document the lives and political careers of Miriam and James Ferguson.

The Miriam A. Ferguson Collection at the Bell County Museum includes photographs, clothing, correspondence, housewares, and furniture. The Museum also keeps almost five hundred issues of the Ferguson Forum, a weekly newspaper James Ferguson published in Temple, Dallas, and Austin to generate funding for his and Miriam's political campaigns. The paper was published until 1935.

Wilson, Carol O’Keefe. In the Governor’s Shadow: The True Story of Ma and Pa Ferguson.Denton: University of North Texas Press, 2014. 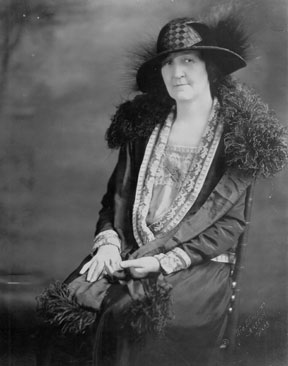 Miriam Ferguson in a campaign photo. Courtesy of the Bell County Museum. 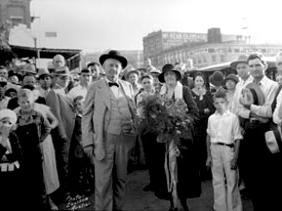 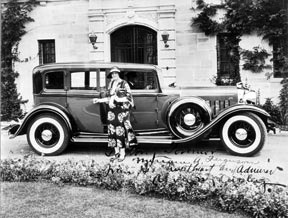 Miriam Ferguson standing in front of Lincoln Limo, chauffeur at wheel. Written at bottom: "To my governor Miriam A. Ferguson. From her sweetheart and admirer, Alvin M. Dunsley." Courtesy of the Bell County Museum.