Oveta Culp Hobby's fascination with government began when she was a young girl, and it continued through her long and interesting life. She was born in Killeen in 1905, the daughter of state legislator Ike Culp.

Oveta Culp received her law degree in 1925 from The University of Texas at Austin. While studying, she served as the state's legislative parliamentarian. In 1931, she married former Texas Governor William P. Hobby. The Hobbys published the Houston Post, and had two children. But when the United States entered World War II, Oveta Hobby was asked to organize a women's support section for the Army. She agreed, and through her efforts, more than 150,000 women served in the Women's Army Auxiliary Corps. In January 1945, Hobby was awarded the Army's Distinguished Service Medal for her work.

After the war, Hobby returned to Houston. But in 1953, President Eisenhower appointed her to lead the newly created Department of Health, Education, and Welfare, where she once again organized an entirely new agency of the federal government.

Oveta Culp Hobby died in 1995, leaving an inspiring record of civic service. Today, her words about women and the war effort are inscribed on the World War II Memorial on the National Mall in Washington. The inscription reads, "Women who stepped up were measured as citizens of the nation, not as women. . . . This was a people’s war, and everyone was in it."

For More about Oveta Cup Hobby

Senator Kay Bailey Hutchison included a chapter on Hobby in her book American Heroines: The Spirited Women Who Shaped Our Country. 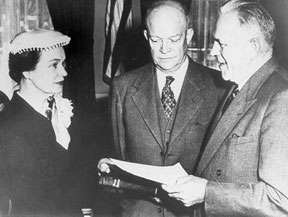