Plácido Benavides is called the "Paul Revere of Texas" for his role in the Texas Revolution.

Born in 1810 in Mexico, Benavides moved to Texas in 1828. He found work in Victoria with the family of empresario Martín De León. Benavides married De León's daughter Agustina and became the city's alcalde.

By 1835, Benavides had joined the Texians in opposing Mexican dictator Santa Anna. As head of Victoria's militia, Benavides stood up to Mexican soldiers trying to arrest suspected rebels. This defiance made him a rebel too.

Benavides helped take Goliad and San Antonio for the Texians. Soon after, he was among the men ambushed by the Mexican army near San Patricio. In the ensuing battle, he was dispatched to Goliad to alert others of the Mexican army's approach.

Benavides's ride to Goliad has been compared to Paul Revere's famous ride in the American Revolution, as both men spread the news of oncoming enemy assault.

It was on this ride that Benavides learned that Texas had declared independence. Though he opposed Santa Anna, Benavides was fighting for Texas as part of a federalist Mexico, not for Texas independence. His relations with the Texas rebels soon soured. After the Texian victory in 1836, Benavides and the De León family left Victoria for exile in New Orleans.

Benavides never returned to Texas. He died in 1837.

For More about Plácido Benavides

In 2011, the city of Victoria dedicated a plaque at city hall honoring Benavides. The plaque reads:

The City of Victoria, Texas, evolved from Villa de Nuestra Senora de Guadalupe de Jesus Victoria, founded by Martín De León in 1824 and laid out according to centuries-old Spanish colonial law. There were only two successful empresario colonies in Mexican Texas, those of Martín De León and Stephen F. Austin. The principal officer in Spanish and Mexican villas was the alcalde, whose duties included those of present-day mayor, sheriff, and local judge. These responsibilities were exercised first by Don Martín De León, followed by Plácido Benavides, whose home, known as the Round Top House, served as a fort, school, and refuge during the Indian raids. During Benavides's leadership, a serious confrontation with Centralist troops attempting to arrest his brother-in-law, Jose Maria de Jesus Carvajal, was peacefully avoided. This event occurred on the Plaza de Mercado, where this monument is displayed. Benavides responded to the June 1835 arrest order with the statement that he was "a constitutional officer" and not at all amenable to the military of Santa Anna. Benavides's service during the struggle to restore the Constitution of 1824 was extraordinary. Ironically, however, he died during exile in Opelousas, Louisiana, in 1837.

Martín De León, Benavides's father-in-law and the founder of Victoria, died in 1833 before the Texas Revolution began. His grave in Victoria's Evergreen Cemetery has become a memorial to the city's founding family. While Benavides never returned to Texas, other members of the exiled De León family eventually did, and reminders of the De Leóns abound in the city. De León Plaza, for example, is now a popular setting for festivals and special events. 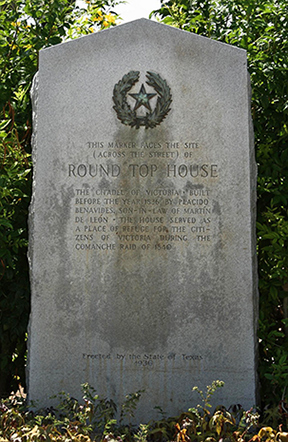 This historical marker stands in Victoria at the corner of South Main and Juan Linn, formerly the site of Plácido Benavides's fortified home, the Round Top House. Photo by Glenn Austerfield.