Born about 1845, Comanche leader Quanah Parker lived two vastly different lives: the first as a warrior among the Plains Indians of Texas, and the second as a pragmatic leader who sought a place for his people in a rapidly changing America.

Parker's birth was a direct result of the conflict between Native Americans and white settlers. His mother, Cynthia Parker, was captured by the Comanche as a child and later married his father, Chief Peta Nocona.

In 1860, after Parker's father was killed by Texas Rangers, young Quanah moved west, where he joined the Quahada Comanche. Parker proved an able leader, fighting with the Quahada against the spread of white settlement.

But in 1875, following the U.S. Army's relentless Red River campaign, Parker and the Quahada ultimately surrendered and moved to reservation lands in Oklahoma.

In his new life, Parker quickly established himself as a successful rancher and investor. The government officials he had once fought soon recognized him as the leader of the remaining Comanche tribes.

Parker encouraged Indian youth to learn the ways of white culture, yet he never assimilated entirely. He remained a member of the Native American Church, and had a total of seven wives.

The respect Parker earned is evident in the Panhandle town of Quanah. There, by the Hardeman County Courthouse, stands a monument to the town's namesake: Quanah Parker, chief of the Comanche.

For More about Quanah Parker

The Quanah Parker Trail is an online road trip guide to the Texas Plains Trail Region featuring sites with a real or legendary connection to the famous chief.

The Star House, Parker's home in Cache, Oklahoma, is listed on the National Register of Historic Places.

Gwynne, S. C. Empire of the Summer Moon: Quanah Parker and the Rise and Fall of the Comanches, the Most Powerful Indian Tribe in American History. New York: Scribner, 2010. 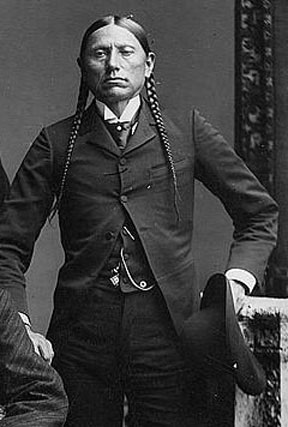 Quanah Parker as part of a Comanche and Kiowa delegation, ca. 1880–1897. Prints and Photographs Division, Library of Congress.