In 1861, as the Civil War loomed, Texas Governor Sam Houston watched his constituents vote to secede from the Union. Houston could not believe that two decades of his work was about to unravel. His loyalty to the Union was genuine, and he was not willing to switch his allegiance to the Confederacy. Houston was forced out of office, but not before saying, "I love Texas too well to bring civil strife and bloodshed upon her."

Houston had never refused a fight in his life. But he understood how disastrous the Civil War would ultimately be.

Sam Houston had arrived in Texas, almost thirty years prior, in 1832. The former congressman and governor of Tennessee's new cause was Texas independence. He led the army that defeated Mexican General Santa Anna at San Jacinto—an achievement that secured his place in Texas history.

Sam Houston’s next challenge was convincing Texans to join the United States. It took almost a decade, but annexation occurred in 1845.

His final home still stands on the grounds of Sam Houston State University and is visited annually by thousands who pay tribute to this iconic Texan.

For More about Sam Houston

The Portal to Texas History has digital facsimiles of numerous primary sources related to Houston’s life and times.

The documentary film Sam Houston: American Statesman, Soldier, and Pioneer has an informative website that includes extensive resources for educators.

The Texas State Library and Archives Commission has images and a transcript of General Sam Houston's report on the Battle of San Jacinto, at which Texas secured its independence.

The Sam Houston Papers at the Briscoe Center for American History at The University of Texas at Austin document Houston’s military service under Andrew Jackson; his terms as congressman and governor of Tennessee; his life among the Indians; and his service to Texas as commander-in-chief of the army in the Texas Revolution, president of the Republic of Texas, one of Texas's first two senators, and governor of the state.

The Sam Houston Papers at Rice University contain government letters and documents written by Sam Houston, letters to Sam Houston from other government officials, and people seeking favors, and personal materials such as letters to and from family members, and bills. 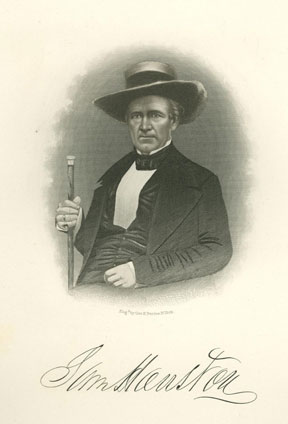 Engraved portrait of Sam Houston. Image courtesy of the Star of the Republic Museum. 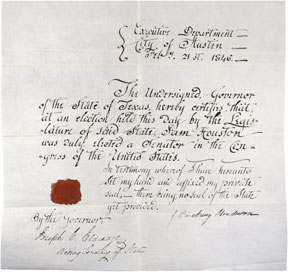 Credentials of the Honorable Sam Houston, Senator from Texas, 1846. Image courtesy of the National Archives. 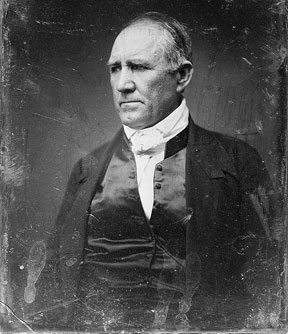