As a young man, Sam Rayburn audaciously declared that he would study law, enter politics, and one day serve in the United States Congress.

He went on to spend forty-nine years in the U.S. House of Representatives, including a record seventeen years as House Speaker. Known affectionately as "Mr. Sam," Rayburn helped pass some of the twentieth century's most important legislation, working, as he put it, "with, not under," eight Presidents.

Born in Tennessee in 1882, Rayburn moved with his family to Fannin County, Texas, when he was five. As a young man, he served three terms in the state legislature and studied enough law at The University of Texas to pass the bar.

Rayburn was elected to Congress in 1912. As chair of the powerful Interstate and Foreign Commerce Committee, he advanced legislation creating the Securities and Exchange Commission and the Federal Communications Commission. During the Depression, he sponsored key measures of Franklin Roosevelt's New Deal and was instrumental in ensuring the nation's preparedness for World War II.

A master of the political process, Rayburn was widely respected for his integrity and fairness. He also served as a mentor to many congressmen, including Lyndon Johnson.

Shortly before his death in 1961, Rayburn said of his career: "I am one man in public life who is satisfied, who has achieved every ambition of his youth."

For more about Sam Rayburn

The Sam Rayburn Papers are held by the Dolph Briscoe Center for American History at The University of Texas at Austin. These include correspondence, speeches, interviews, newspaper clippings, and other materials documenting Rayburn's political career.

In 1949, Sam Rayburn was awarded the Collier's Award for distinguished service to the country. He used the $10,000 prize to help establish the Sam Rayburn Museum in Bonham, Texas, as a tribute to the people of Fannin County. The museum is now a division of UT Austin's Dolph Briscoe Center for American History. It is open to the public and contains mementoes of Rayburn's life and career, including his extensive personal library. 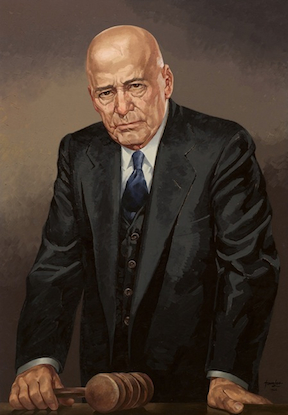 Sam Rayburn with Lyndon Johnson and Adlai Stevenson at the LBJ Ranch, 1955. Photo by J. A. Dodd, Kingsville, Texas. Courtesy of Sam Rayburn Papers, Dolph Briscoe Center for American History, The University of Texas at Austin.