On a cold March dawn in 1836, Mexican officers escorted a shaken young woman and her infant daughter past the heaps of dead in the Alamo courtyard to Mexican General Antonio Lopez de Santa Anna. The woman, Susanna Dickinson, was the wife of Alamo defender Almaron Dickinson. She and her baby were hiding in the Alamo's chapel when Mexican troops bayoneted her husband and took the mission.

Dickinson had come to Texas with her husband from Tennessee in 1831, when she was seventeen. They settled in Gonzales, where their daughter Angelina was born. In 1835, Mexican and Texian troops clashed near Gonzales, and the Texas Revolution began. Almaron volunteered with the Texians, and his small family soon joined him at the Alamo. There, they waited for reinforcements that never came.

After the Alamo fell on March 6, 1836, Santa Anna sent Susanna and her daughter to Gonzales to warn Texians about the strength of the Mexican army. That sparked the Runaway Scrape, as settlers fled eastward ahead of Santa Anna’s advancing troops. Sam Houston's victory over the Mexican Army at San Jacinto, the following month, ended the war.

After the war, Dickinson endured a string of unsuccessful marriages before finally marrying merchant J. W. Hannig in 1857. She remained with him until her death in 1883 and is buried next to him in Oakwood Cemetery in Austin.

For More about Susanna Dickinson

Susanna Dickinson's final home in Austin is now the Joseph and Susanna Dickinson Hannig Museum. Visit the museum's Facebook and Tumblr pages for the most up-to-date information on exhibitions and events.

Todish, Timothy J. and Terry Todish. Alamo Sourcebook 1836: A Comprehensive Guide to the Battle of the Alamo and the Texas Revolution. Austin: Eakin Press, 1998. 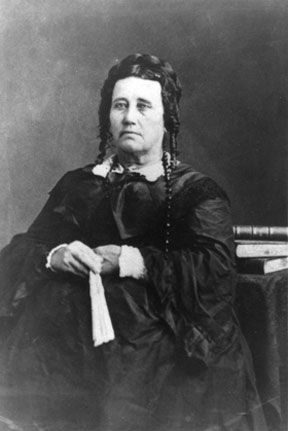 The Joseph and Susanna Dickinson Museum in Austin. Photo courtesy of the museum.