A mural in the El Paso Federal Court House named Pass of the North typifies the work of Texas artist Tom Lea. Larger-than-life figures representing El Paso's many inhabitants—a Mexican vaquero, a conquistador, Apache Indians, and pioneers—all range across the courthouse wall. Behind them, stark desert light illuminates a mountain range, while storm clouds threaten in the distance. In Lea’s paintings, viewers see the light, space, and stillness of his beloved Franklin Mountains, as well as the energy, motion, and even violence of life.

Born in 1907, Lea grew up a part of El Paso's colorful history. His father was the city's mayor, and when Mexican revolutionary Pancho Villa placed a bounty on Mayor Lea’s head, young Tom traveled to school with a police escort.

Lea studied at the Art Institute of Chicago and during World War II, he traveled with the 1st Marine Division as a reporter for Life magazine. His paintings of Pacific battles brought home the emotional toll of warfare.

Lea also illustrated books for friends, including fellow Texan J. Frank Dobie. After the war, Lea began writing books of his own. Two of his novels, The Brave Bulls and The Wonderful Country, became successful Hollywood films.

But Lea is most remembered for his paintings inspired by West Texas subjects—the diverse cultures, the austere desert mountains, and what he once described as “the wonderful, ever-changing light on the structure of the world.”

For More about Tom Lea

The website of the Tom Lea Institute offers a comprehensive introduction to Tom Lea, including images of his works and a library of videos of presentations on the many facets of the artist's life and career. The Harry Ransom Humanities Research Center at The University of Texas at Austin has collections of Lea's art, papers, and photographs. 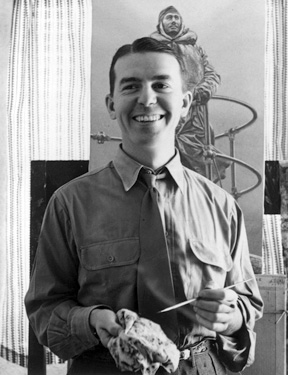 Tom Lea in his El Paso home following his first wartime tour of duty. On the easel is the painting Coxwain ­Argentia Bay, 1941, now in the U.S. Army Center for Military History, Fort Belvoire, Virginia. Courtesy of the Tom Lea Institute. 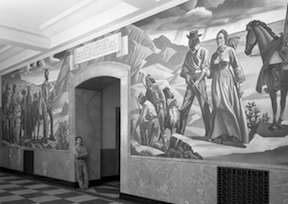 Tom Lea and his 1938 mural Pass of the North in the Federal Courthouse, El Paso, Texas. Ewing Waterhouse, photographer. Courtesy of the Tom Lea Institute.