Walter Prescott Webb remains one of Texas's most significant and influential scholars.

Born in 1888, Webb grew up in Stephens County. In 1904, an Atlanta literary magazine published a letter written by a young Webb asking how he could become a writer. Remarkably, a New Yorker named William E. Hinds read the letter and became Webb's benefactor, sending him books, money, and encouragement. With Hinds's support, Webb entered The University of Texas in 1909, where he eventually received a doctorate.

As a scholar, Webb made his name with The Great Plains, his 1931 study that shows how the distinctive climate and geography of the American West shaped the region's history. In 1950, a survey of historians identified the book as the single most important work in U.S. history written since the turn of the century.

Webb died in 1963. In a memorial, J. Frank Dobie described him as "the most powerful thinker I have ever known." "Most historians deal with the past as the past," said Dobie. "Webb dealt with it as a guide to the future."

For More about Walter Prescott Webb

The Handbook of Texas, created and sponsored by the Texas State Historical Association, was first published in 1952. The encyclopedia includes information about the state's geography, history, and significant individuals. The handbook was expanded to six volumes in 1996 to include more information about women and minorities in the state, and debuted online in 1999. The encyclopedia now contains over twenty-five thousand articles and has become the model for other state encyclopedia projects.

In the 1950s, the distinguished folklorist Américo Paredes first criticized Webb for his portrayal of Indians and Mexican Americans and his consistently approving and even romantic depiction of the Texas Rangers. Paredes notes that Webb, in his 1935 study The Texas Rangers: A Century of Frontier Defense, overlooked many of the atrocities the Rangers committed, from the Mexican War of 1846–1848 through the early decades of the twentieth century. Near the end of his life, Webb too felt that his book on the Rangers required revision and that he had failed to sufficiently incorporate Mexican and Mexican American perspectives. (As he explained to the director of the University of Texas Press, "If a man can't grow in thirty years, he may as well be dead.") Sadly, Webb was killed in an automobile accident before he had the opportunity to update his work. 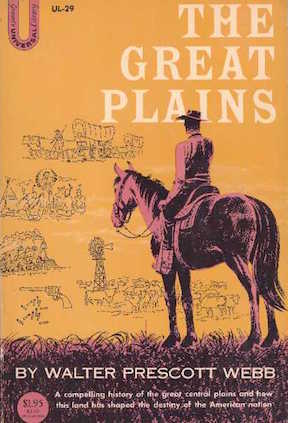 Cover of The Great Plains.