William Barret Travis was only twenty-six years old when he died defending the Alamo. He came from Alabama just five years before, in 1831, leaving behind a failed career and marriage. Texas, a land he came to love, gave Travis a new life—and an early death.

Travis clashed with authorities in Anahuac shortly after arriving in Texas, feuding over Mexico's antislavery laws. He spent two months in prison and earned a reputation as a troublemaker, but went on to build a successful law practice. Then, in June 1835, as tension mounted between colonists and Mexican officials, Travis returned to Anahuac. With twenty volunteers and a small cannon, he forced the local customs officer to leave town. That was Travis's first experience with military action just as the Texas Revolution was unfolding.

Six months later, in February 1836, newly commissioned Lt. Colonel Travis assumed joint command of the Alamo with James Bowie. As Mexican forces gathered, Travis sent dispatches to fellow Texians pleading for reinforcements. "If my countrymen do not rally to my relief," he declared, "I am determined to perish in defense of this place, and my bones shall reproach my country for her neglect."

His words were prophetic: little help came, but outrage over the slaughter of Travis and other Alamo defenders inspired a rush of Texian volunteers who ultimately defeated Mexican General Santa Anna at San Jacinto.

For More about William Barret Travis

The William Barret Travis Papers, 1831–1924, at the Dolph Brisoce Center for American History at The University of Texas at Austin contain Travis's diary and correspondence.

The plea for help that Travis wrote from the Alamo on February 24, 1836, is permanently housed at the Texas State Archives and Library. Often referred to as Travis’s “Victory or Death!” letter, it symbolizes the spirit of defiance and perseverance demonstrated by the defenders of the Alamo. Travis boasts that he has held the fort against Santa Anna’s forces for twenty-four hours without losing a man. However, in light of his refusal to surrender or retreat, he requests the assistance of the United States “in the name of Liberty, of patriotism & everything dear to the American character” to support the Texian cause. The letter is one of the most famous documents in Texas history.

Roberts, Randy and James S. Olson. A Line in the Sand: The Alamo in Blood and Memory. New York: The Free Press, 2001. 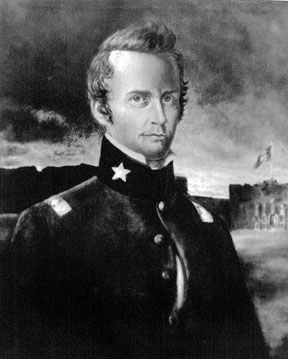 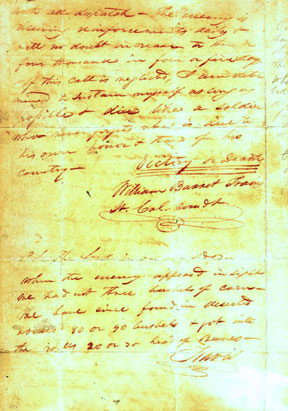