His thousands of admirers called him a saint. His adversaries—and there were many—called him the Devil’s apostle. But Waco publisher and journalist William Cowper Brann preferred to be known by the name of the weekly journal he published, the Iconoclast.

As arrogant as he was brilliant, Brann was among the most famous journalists in America in the late nineteenth century.

At its peak, the Iconoclast boasted a circulation of a hundred thousand readers. Raw, biting humor and corrosive satire were its trademarks.

The Iconoclast crusaded tirelessly against what Brann called “humbugs and humbuggery.” He was an unrepentant racist to be sure—like many Texas journalists of the day—but neighboring Baylor University drew his most scathing attacks.

For example, Brann once called Baylor “that great storm-center of misinformation.”

A group of Baylor students once kidnapped their nemesis, demanded that he retract his statements about the school, and ordered him to leave town, but Brann bucked their command and kept writing.

On April 1, 1898, a Waco businessman shot Brann in the back on a downtown street. The injured editor drew his own revolver, whirled around, and gunned down his assailant. Brann’s own wound proved fatal; he died that evening.

William Cowper Brann is buried in Waco's historic Oakwood Cemetery. His granite monument is pock-marked by a bullet.

For More about William Cowper Brann

The Harry Ransom Center at The University of Texas at Austin houses the William Cowper Brann Papers, 1855–1898. The collection includes manuscripts for his plays, combative correspondence between Brann and religious and political leaders, and letters of support from readers of the Iconoclast.

Today two plaques in downtown Waco commemorate the sometimes-deadly conflicts between Brann supporters and critics. In addition to the "Brann-Davis" shooting, which proved fatal for both Brann and Baylor-defender Tom Davis, a plaque marks the "Gerald-Harris Shooting," which ended when Brann-supporter Judge George Gerald fatally shot both the editor of Waco's Times-Herald, James W. Harris, and his brother.

Several volumes of Brann's Iconoclast are available at no cost through Project Gutenberg. 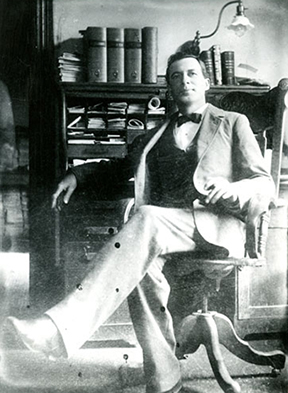 William Cowper Brann sitting in his office at the Iconoclast. Image courtesy of The Texas Collection, Baylor University.