In the 1920s, writer Winifred Sanford's stories of the Texas oil boom captured the anxieties of a state on the verge of modernization.

Born in Minnesota, Sanford moved to Wichita Falls in 1920, as her husband sought his fortune in the new oilfields of North Texas.

At first, Sanford found the small town stifling. But she soon realized the oil boom made Texas more complex than it had first seemed. Swift change made for great stories.

Sanford published her first short story in 1925. She hit her stride with "Windfall," a 1928 story about a woman experiencing the discovery of oil on her family farm. In her fiction, Sanford measured what Texans gained and lost in such moments—in contrast to the frontier nostalgia that then dominated the state's literature. H. L. Mencken of The American Mercury took note and became Sanford's mentor.

Sanford's stories appeared in some of the most popular magazines of the day. Literary tastemaker Edward O'Brien included four of her works in The Best Short Stories of 1926.

Later in life, Sanford moved away from writing. She died in 1983, her work forgotten outside a handful of scholars. In 1988, however, those scholars' efforts led to the first published collection of Sanford's stories, which has helped to restore her place in the Texas literary canon.

For More about Winifred Sanford

While the 1988 publication of Windfall and Other Stories revived Sanford's literary reputation, the recent biography by Betty Wiesepape will likely solidify Sanford's place among the significant authors in the history of Texas literature. Wiesepape based her work in part on boxes of Sanford's papers that had been kept in a family attic until they found an archival home at The Wittliff Collections at Texas State University in San Marcos. Of particular note are the letters exchanged between H. L. Mencken and Sanford on the craft of writing, in which Mencken takes a more nurturing and respectful tone than is typically expected of the sardonic dean of Twenties letters.

Since Sanford participated in its founding in 1936, the Texas Institute of Letters (TIL) has served as the premier organization recognizing literary achievement in the Lone Star State. Membership in the institute is invite-only, a badge of honor for Texas writers. Together with The University of Texas at Austin, the TIL also manages the Dobie Paisano Fellowship Program, which gives authors the opportunity to live and work on folklorist J. Frank Dobie's historic ranch outside Austin. 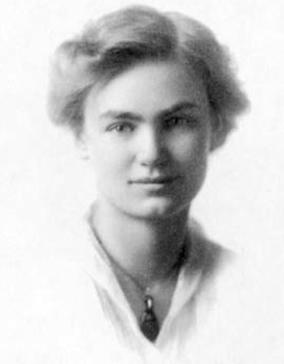 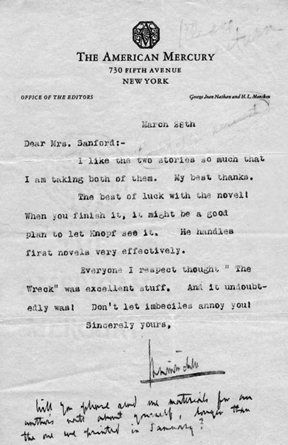