According to one of his fans, actor and Texas native Zachary Scott had an air of sophistication that made him look like he had "been born in a dinner jacket." Best known for portraying scoundrels, playboys, and villains, Scott was one of Texas's most recognizable faces during Hollywood's golden age.

Born in Austin in 1914, Scott studied acting at The University of Texas. He worked in regional theaters in England before landing on the stage in New York. In 1944, when Hollywood discovered his aristocratic good looks, he embarked upon a motion picture career that included more than thirty films.

Scott's range as an actor was impressive. In 1945, the year he portrayed Joan Crawford's suave but shady husband in Mildred Pierce, he also appeared as a poor Texas sharecropper in director Jean Renoir's masterpiece The Southerner.

But Scott chafed under the Hollywood studio system, which typecast him as a villain. He ultimately moved away from film roles and returned to the stage, enjoying considerable success.

In 1965, Scott was diagnosed with cancer and returned to his family's home in Austin, where he died later that year.

Today, a thriving community theatre named for Zachary Scott stands in downtown Austin, cultivating Texas's next generation of dramatic talent. Scott's memory is kept alive in Hollywood as well, where his name graces a star on the renowned Walk of Fame.

For More about Zachary Scott

The Zach Theatre is the oldest continuously operating theater in Texas. Its 2012–13 season will be the first performed in the new Topfer Theater, located in central Austin just south of Lady Bird Lake.

Zachary Scott's filmography is listed on the Internet Movie Database. 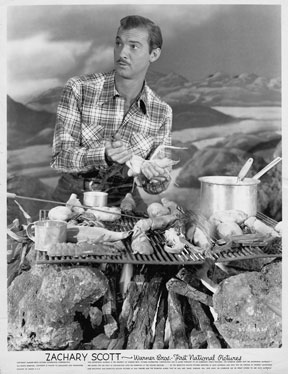 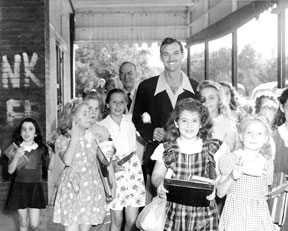 Zach Scott with a group of Austin students at the Austin Train Depot, n.d. Courtesy of the Zach Theatre.