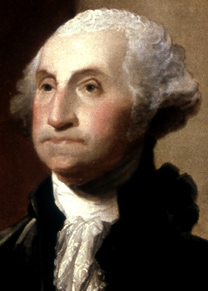 “...the preservation of the sacred fire of liberty, and the destiny of the Republican model of Government, are justly considered as deeply, perhaps as finally staked, on the experiment entrusted to the hands of the American people.”

“First in war, first in peace, and first in the hearts of his countrymen,” George Washington was the unanimous selection to become the first president of the United States under the Constitution. As the hero of the Revolutionary War, he had the stature and credibility to take on the leadership of the fragile new nation, and he assumed the role with dignity and humility. His popularity helped convince the American people of the necessity, effectiveness, and safety of a strong national government.

Describing his efforts as “walking on untrodden ground,” Washington set precedent with every action of his administration. Working with Congress, he established the cabinet as an advisory body; raised bonds, taxes, and tariffs to cover the national debt and pay for government operations; and helped plan the new capital city on the Potomac. In the international arena, he relied on diplomacy to remain “unentangled in the crooked politics of Europe.” He believed that the United States must grow on its own, free of international alliances, in order to prosper. Though he preferred to govern with an even hand, keeping himself above the fray, tumultuous politics at home and treacherous politics abroad forced him to make decisions and assert policies that created opposition.

Before leaving office, he wrote a moving message to the American people warning of the political dangers he saw threatening his cherished Union. His Farewell Address continues to be read to the Senate every year on February 22nd.

A brief worksheet that guides students through an initial examination of the Washington poster.

A worksheet that asks students to examine closely each image featured on the Washington poster.

A translation of the poster narrative describing Washington's vision for his presidency.

Further activities, assignments, and resources related to the Washington poster.

This guide shows how the President’s Vision George Washington materials correlate to the TEKS for social studies.

Download a full-size, high resolution version of the Washington Poster. 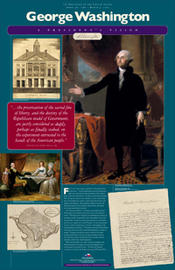 Download the primary sources that appear on the poster and other resources related to Washington's presidency in the Digital Repository. 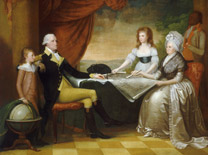 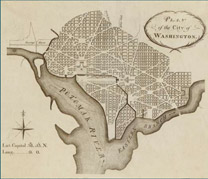