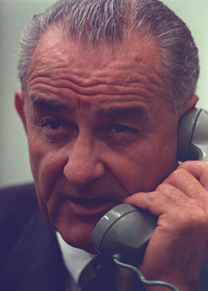 “And these enemies too, poverty, disease and ignorance, we shall overcome.”

Special message to the Congress, "The American Promise"
March 15, 1965

The assassination of John F. Kennedy elevated Vice President Lyndon Baines Johnson to the White House during the turbulent 1960s. Determined to alleviate poverty, ignorance, and racial discrimination, the Texan worked tirelessly to enact programs designed to improve life for all citizens and move the nation “not only toward the rich society and the powerful society, but upward to the Great Society.” A persuasive veteran of Capitol Hill, LBJ rallied Democrats and courted Republicans to pass hundreds of laws. His far-reaching accomplishments include three landmark civil rights statutes to eliminate injustice and racial discrimination: the 1964 Civil Rights Act, the 1965 Voting Rights Act, and the Fair Housing Act of 1968. In just five years as president, LBJ put government to work on behalf of the people by establishing such programs as Medicare, Medicaid, Head Start, and Legal Services and launching initiatives promoting student loans, job training, food stamps, community action, immigration reform, environmental protection, consumer safeguards, and support for the arts, humanities, and education.

After escalating an increasingly divisive war in Vietnam, LBJ ultimately decided not to seek a second term in 1968. Although the war impeded his domestic agenda and eroded his popularity, his visionary Great Society transformed the nation with enduring innovations and reforms.

A brief worksheet that guides students through an initial examination of the Johnson poster.

A worksheet that asks students to examine closely each image featured on the Johnson poster.

A translation of the poster narrative describing Johnson's vision for his presidency.

Further activities, assignments, and resources related to the Johnson poster.

This guide shows how the President’s Vision Lyndon B. Johnson materials correlate to the TEKS for social studies.

Download a full-size, high resolution version of the Johnson poster. 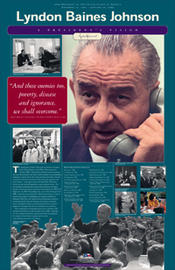 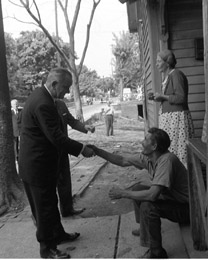