Each institute focused on topics and skills central to the state's eleventh-grade English Language Arts curriculum. Topics addressed included the American Renaissance, the literature of the Civil War era and the Gilded Age, the Harlem Renaissance, American writing during the World Wars, the rhetoric of the civil rights movement, American drama and poetry, and Southwest and Latino literature in the twentieth century.

The institutes emphasized close interaction with scholars, the examination of primary texts, and the development of effective pedagogical strategies and engaging assignments and activities. Focused presentations addressed the critical reading skills necessary for student success at the post-secondary level.

Randall Fuller (University of Tulsa) delivered the keynote presentation at the Austin institute. The keynote speaker at the El Paso institute was David S. Reynolds (The Graduate Center, City University of New York).

The Austin institute took place on the UT Austin campus from June 6–9, 2016. A schedule of the institute can be found here.

The El Paso institute took place on the UTEP campus the following week, from June 14–17, 2016. A schedule of the institute is available here.

The institutes were made possible with major funding from the State of Texas, with ongoing support from the National Endowment for the Humanities. 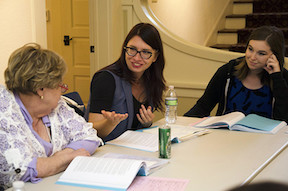 Julie A. Minich, assistant professor of English, Mexican American and Latina/o studies, and women’s and gender studies at The University of Texas at Austin, leads a seminar on Latino writing at the "Teaching the American Literary Tradition" institute in Austin. 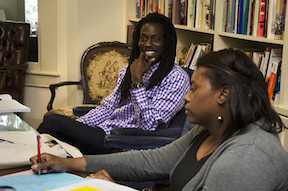 Roger Reeves, assistant professor of poetry at the University of Illinois at Chicago, leads a seminar on strategies for teaching poetry at the "Teaching the American Literary Tradition" institute in Austin. 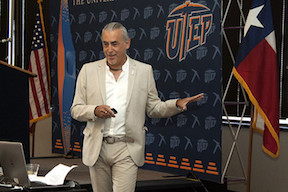 Author and Humanities Texas board member John Phillip Santos speaks about the literature of the Southwest at the "Teaching the American Literary Tradition" institute in El Paso.