Each institute focused on topics and skills central to the state's high school ELA curriculum. Topics addressed included the American Renaissance, the literature of the Civil War era and the Gilded Age, the Harlem Renaissance, American writing during the World Wars, contemporary American fiction and poetry, and how American life has been portrayed in not only literature but also music, drama, television, and film.

As in past years, the institutes emphasized close interaction with scholars and writers and the examination of primary texts. Faculty presentations provided resources and strategies for helping students to become better readers of fiction, poetry, and expository prose, while also addressing the critical reading and media literacy skills necessary for success at the post-secondary level and beyond. At both institutes, teachers were introduced to the Close Reading Interpretive Tool developed by English faculty at UT Austin.

The institutes were made possible with major funding from the State of Texas and the Kronkosky Charitable Foundation, with ongoing support from the National Endowment for the Humanities. For the San Antonio institute, the Witte Museum generously hosted the opening lecture by Shelley Fisher Fishkin and the Plaza de Armas Gallery hosted the Santos and Jiménez readings. In Austin, the Harry Ransom Center offered participants the unique opportunity to view highlights of the Center's remarkable holdings in American literature. Robert S. Levine, professor of English and Distinguished University Professor at the University of Maryland, delivers the institute’s keynote lecture, “What is the American Literary Tradition? An Editor’s Perspective" in Austin 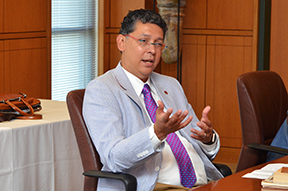 Michael Soto, associate vice president for academic affairs and professor of English at Trinity University, leads a seminar on the Harlem Renaissance in San Antonio. 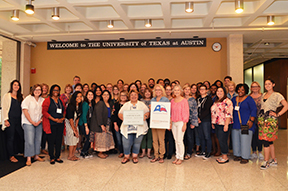 Institute participants gather at the Thompson Conference Center on the campus of The University of Texas at Austin. 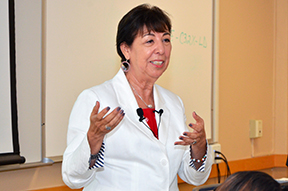 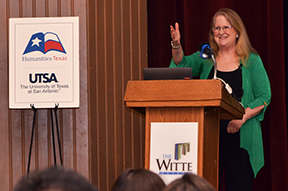