"The Making of Modern America" and "Shaping the American Republic to 1877:" 2011 Summer Teacher Institutes

View photos from all six institutes!

“This was by far the best workshop I’ve attended,” exclaimed a teacher who attended “The Making of Modern America,” a teacher institute held last month. Another teacher called the program “a rare treasure” and said that it would “benefit her students on an interdisciplinary level.”

These teachers’ comments are typical of the enthusiastic responses Humanities Texas received from the 252 teachers who participated in “The Making of Modern America” and “Shaping the American Republic,” a series of six teacher institutes held around the state in June.

All teachers attended at no cost to themselves or their schools. In addition to earning Continuing Professional Education credit, participants received a $200 stipend, travel expenses, and a wealth of instructional materials.

“The Making of Modern America” examined significant events and themes in U.S. history since Reconstruction. Each institute's curriculum tracked to the state standards for eleventh-grade U.S. history. Topics included the social movements of the Progressive Era, the effects of World War II on American foreign policy and the economy, U.S. involvement in the Cold War, and the civil rights movement as it pertained to both African Americans and Hispanics.

“Shaping the American Republic to 1877” explored topics from the Colonial Era through Reconstruction that are central to Texas’s eighth-grade social studies curriculum. Presentation topics included the factors that encouraged European exploration during the Colonial Era; the challenges confronted by the American government and its leaders in the early years of the Republic; the effects of westward expansion on the political, economic, and social development of the nation; and the causes of the Civil War.

Institute participants had high praise for the institute faculty and appreciated having the opportunity to work with them in such an intimate setting. “The presentations and primary source workshops got me excited about history again. The presenters gave me exciting new stories that I can’t wait to share with my students,” noted a teacher who attended the Austin institute.

A Laredo participant concurred. “The presenters’ knowledge of the subject matter was amazing! These men and women are experts in their fields of study and it inspired me to have them share their insights.”

The institutes featured keynote presentations from widely known and respected scholars. H. W. Brands, a two-time finalist for the Pulitzer Prize for History, opened the Austin and El Paso institutes with public lectures on the Gilded Age in America.

Cynthia A. Kierner, professor of history at George Mason University, launched the Fort Worth institute with her keynote address “Tea and the Politics of Protest in Early America.” In Houston, Pulitzer Prize-winner Gordon S. Wood explored the history of the early Republic in his keynote address, “Empire of Liberty,” which closely followed his recent book of the same name.

In Laredo, Michael Les Benedict, professor emeritus of history at The Ohio State University, examined constitutional history since Reconstruction in his keynote speech. On the opening night of the San Antonio institute, Steven Mintz, director of the Graduate School of Arts and Sciences Teaching Center at Columbia University, discussed ten revolutions in American life that took place in the twentieth century.

In their program evaluations, teachers emphasized that the faculty’s expertise resulted in a program with uncommon intellectual rigor and depth. As one Austin attendee wrote, “The lectures were incredible and helped fuel my passion for U.S. history and remind me of the great importance U.S. history plays in the development of students as they become active in the political process.”

Profiles and photos of several participating scholars were featured in our April e-newsletter.

In addition to their rich content-based curriculum, “The Making of Modern America” and “Shaping the American Republic” provided teachers with the opportunity to learn about the wealth of resources available at the state’s leading cultural institutions. In San Antonio, teachers toured the Institute of Texan Cultures with the ITC’s educational specialists. Houston participants explored the Museum of Fine Arts, Houston. Fort Worth attendees visited the Amon Carter Museum of American Art, and teachers attending the Austin program learned about the many resources available at the Lyndon B. Johnson Library and Museum.

Until 2010, Humanities Texas had held no more than two teacher institutes each summer. The ambitious scope of “The Making of Modern America” and “Shaping the American Republic” was made possible with Humanities Texas’s first-ever state legislative appropriation.

Recognizing that the quality of teachers is a critical factor in student achievement, Lieutenant Governor David Dewhurst initiated an expansion of the Humanities Texas teacher enrichment program with state funding in 2009. Through Dewhurst's leadership and the support of Speaker Joe Straus and Representative Mike Villarreal, the Texas Legislature appropriated funding for an expanded program with an emphasis on new teachers in low-performing schools.

In their program evaluations, many participants emphasized that the institutes provided crucial training for early-career teachers. One Fort Worth participant wrote, “As a new teacher, I eagerly welcome new activities and lesson plans. I have learned so much and I can’t wait to share this information with my students.”

Other participants stressed the importance of meeting and working with colleagues from around the state. Of the Fort Worth program, a teacher wrote, The primary source workshops gave opportunities to give and receive feedback from presenters one-on-one with great ideas being exchanged between peers. I loved how new and seasoned teachers were able to interact for the benefit of all.”

“The Making of Modern America” and “Shaping the American Republic to 1877” were made possible with support from the State of Texas as well as from the National Endowment for the Humanities We the People initiative.

Our 2011 institutes will reach a much larger audience than the teachers who attended the institute. Participants have agreed to share what they learned with colleagues and to promote the institutes’ website, where digital facsimiles of historical documents, faculty PowerPoint presentations, and other teaching resources are available for download. Humanities Texas will also make selected sections of the faculty presentations available on our website and via TEA’s channel on iTunes. The group of teachers who attended the institute at The University of Texas at El Paso. All photos in this page by Humanities Texas unless otherwise noted. 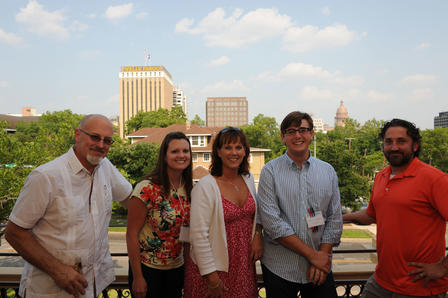 Teachers attended a reception at the Byrne-Reed House during the Austin institute. 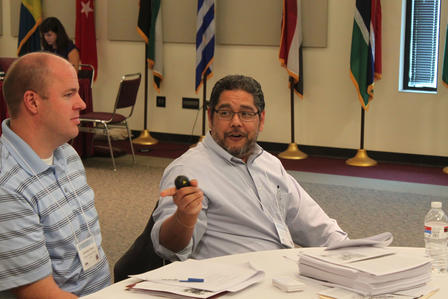 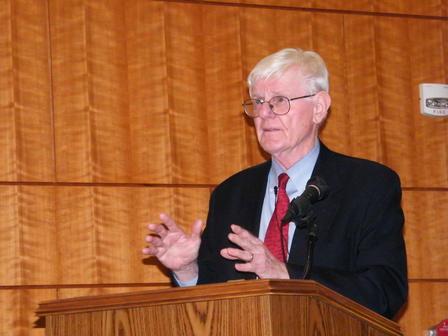 Mary L. Volcansek, Texas Christian University professor of poitical science and Humanities Texas board chair, gives a lecture on the Constitution in Fort Worth. 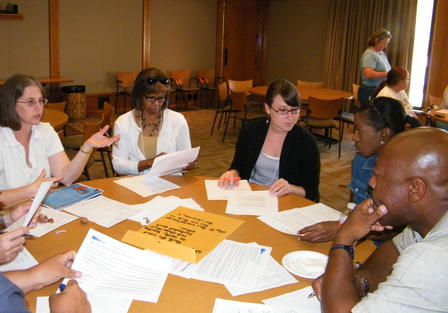 San Antonio teachers learn about educational resources at the Institute of Texan Cultures. 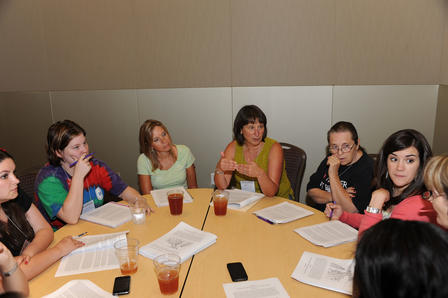 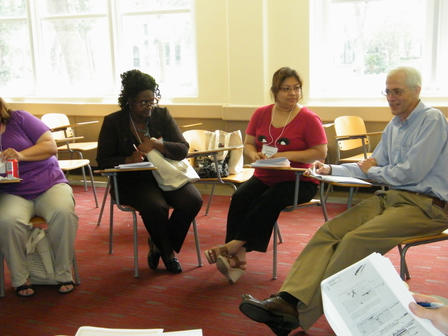 Charles Flanagan, director of educational programs at The Center for Legislative Archives at the National Archives, shares resources with Houston teachers. 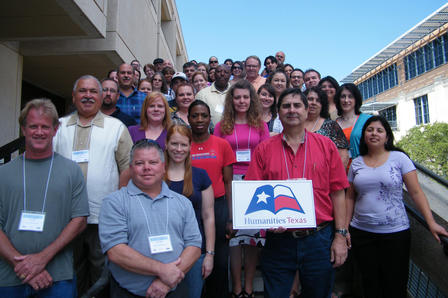 The teachers who participated in the San Antonio program. 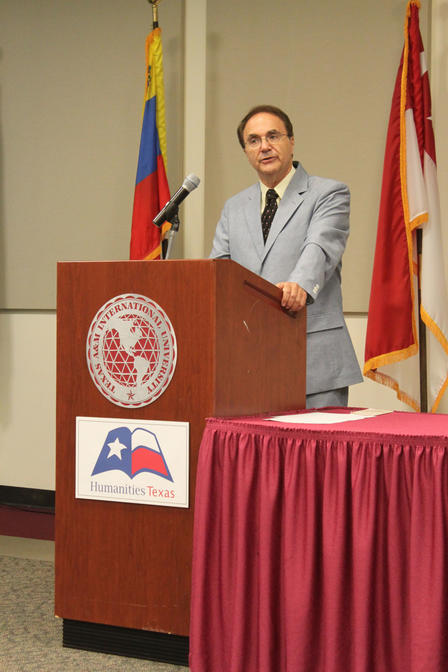 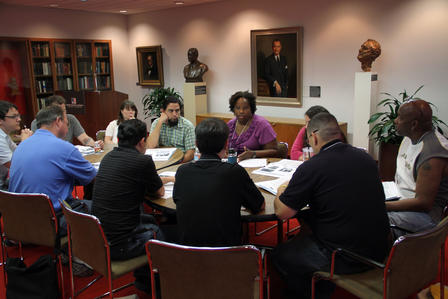 Tiffany Gill, associate professor of history at The University of Texas at Austin, leads a primary source workshop at the Lyndon Baines Johnson Library and Museum.