Pivotal U.S. Elections: Then and Now

"The Election of 1860 and Its Contemporary Significance"

On April 19, 2016, the UT College of Liberal Arts and Humanities Texas hosted an evening of discussion about citizenship, democracy, and pivotal presidential elections in American history at the Glickman Conference Center at The University of Texas at Austin. Expert faculty analyzed, through an interdisciplinary lens, the political forces, issues, and consequences of the election of 1860 as well as its parallels to subsequent elections and its relevance today.

Excerpts from faculty presentations and photographs from "The Election of 1860 and Its Contemporary Significance" inaugural forum are featured in our August 2016 e-newsletter.

The scholars participating in this program recommend the following reading selections, which provide additional context for the topics addressed at the inaugural forum:

Daina Ramey Berry, The Rise of Abolitionism
George Forgie, The Emergence of the Republican Party
Randall Fuller, How Writing Influenced Public Opinion
Daniel Feller, Efforts to Compromise
Andrew Torget, The Situation in Texas
Jacqueline Jones, The Human and Economic Cost of the Civil War
Michael Les Benedict, The Impact on the U.S. Constitution

The public forum series Pivotal U.S. Elections: Then and Now was made possible in part by a Humanities in the Public Square grant from the National Endowment for the Humanities: Celebrating 50 Years of Excellence. 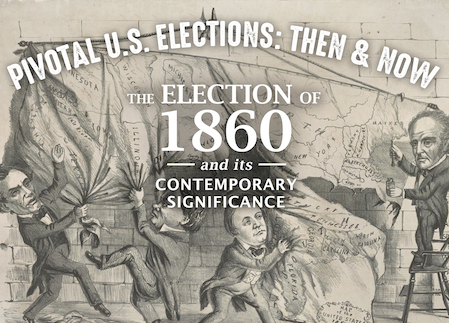 Dividing the National Map. Cincinnati, 1860. Political cartoon satirizing the U.S. presidential election of 1860 in which four candidates vie for the office. Prints and Photographs Division, Library of Congress.

Questions about this program?

Andrew J. Torget, associate professor of history and director of the Digital History Lab at University of North Texas, delivers a talk on the election of 1860 on February 17, 2016, at the Region 15 Education Service Center in San Angelo, Texas. Torget's presentation was part of "Slavery, Secession, the Civil War, and Reconstruction," a professional development workshop for classroom teachers.