Empresario Martín De León founded the city of Victoria and played a key role in settling the Texas Coastal Bend.

De León was born in 1765 to an aristocratic family in Burgos, Mexico. After serving as a soldier, De León married and planned to settle his new family in Texas. In 1801, the couple began building a ranch along the Nueces River near present-day San Patricio.

When Mexico began issuing empresario contracts to attract settlers, De León saw an opportunity to ensure that his children could establish ranches of their own. In 1824, he founded a colony centered on the new city of Victoria. De León oversaw the only empresario grant to attract large numbers of settlers from Mexico rather than the United States.

As tensions rose between Anglo American colonists and the Mexican government, De León forged a neutral path—although he and his family supported local control in Texas affairs.

De León died in the cholera epidemic of 1834, two years before the Republic of Texas was established. Though his family had sided with the victorious rebels, Anglos in the new republic made life difficult for their former Tejano allies. The De León family fled into exile in Louisiana, returning to the city they founded only after Texas's annexation to the United States in 1845.

For More about Martín De León

De León's grave in Victoria's Evergreen Cemetery has become a memorial to the city's founding family. Further, reminders of the De Leóns abound in the city, including a historical marker at the former site of the famed “Round Top House” belonging to Martín's son-in-law Plácido Benavides. Known also as “Plácido’s Round House,” this was an important site for defense against Native American raids in the early days of the colony.

Victoria's Museum of the Coastal Bend celebrates the history and culture of the vibrant area settled by the De León family.

The Sons of DeWitt Colony Texas maintain an extensive website with a wealth of materials related to the history of the empresario system in Texas. The site devotes a great deal of coverage to the story of the De León family. In addition to sources on De León's rival empresario Green DeWitt, viewers can locate biographical information on Martín De León and his prominent family members Fernando De León, Plácido Benavides, and José María Jesús Carbajal. 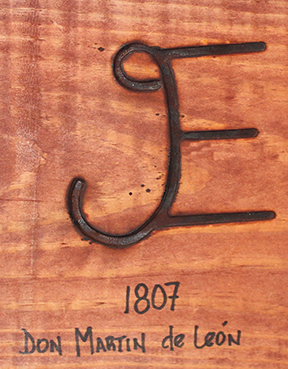