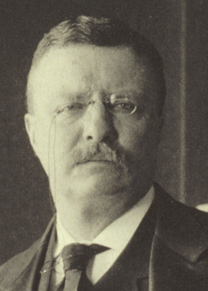 "We must treat each man on his worth and merits as a man. We must see that each is given a square deal, because he is entitled to no more and should receive no less."

Vice President Theodore Roosevelt assumed the presidency in 1901, when an anarchist assassinated William McKinley. As the youngest president in U.S. history, Roosevelt possessed remarkable physical vigor and a keen instinct for publicity. He expanded presidential power through assertive action and his influence on public opinion, using his office as “a bully pulpit.”

At the dawn of the twentieth century, Americans struggled with the effects of industrialization. Corporations wielded vast economic and political power, and the gap between rich and poor widened. Underpaid workers toiled in hazardous conditions while living in crowded cities. Roosevelt, a patrician activist leading a conservative Republican party, espoused a moderate but progressive agenda to preserve capitalism by reforming it. He supported federal regulation of railroad rates, pure food and drug legislation, and anti-trust lawsuits against harmful corporate monopolies. An ardent outdoorsman, he also advanced the conservation of natural resources, establishing the U.S. Forest Service and preserving seven million acres of public land from development.

Roosevelt’s approach to foreign policy was to “speak softly and carry a big stick,” so he modernized and expanded the armed forces. After manipulating Panama’s separation from Columbia, he took over construction of the Panama Canal. In 1906, he received the Nobel Peace Prize for negotiating an end to the Russo-Japanese War.

Roosevelt promised a government that would serve as an impartial referee between corporations and citizens, providing a “square deal.” He supported the rights of workers and taxes on the wealthiest citizens. He was overwhelmingly reelected in 1904 and served until 1909. In 1912, he came out of retirement to run as a third party candidate but lost to Democrat Woodrow Wilson.

A brief worksheet that guides students through an initial examination of the Roosevelt poster.

A worksheet that asks students to examine closely each image featured on the Roosevelt poster.

A translation of the poster narrative describing Roosevelt's vision for his presidency.

Further activities, assignments, and resources related to the Roosevelt poster.

This guide shows how the President’s Vision Theodore Roosevelt materials correlate to the TEKS for social studies.

Download a full-size, high resolution version of the Roosevelt poster. 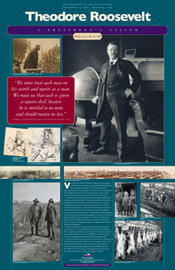 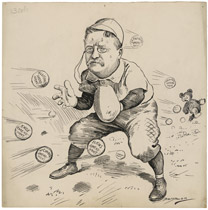 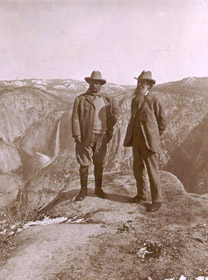